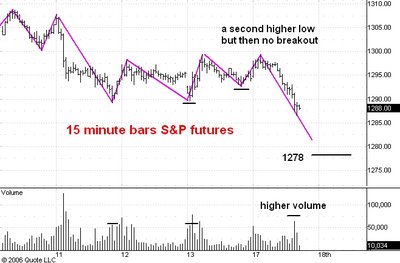 Here is a 15 minute bar chart of the June S&P e-mini futures. I last commented on this chart here.

I had been expecting the 1289.25 low to hold, especially after the market made a second higher low at 1292.75 late last Thursday. But a few minutes ago the S&P broke to 1287.50. I think this breakout is genuine and means that the market is headed down to 1278. The two bearish clues that are significant here are the high volume on the breakout bar, higher volume than was seen on the last two visits to 1289, and the fact that the swing down from today's high of 1299.25 is deeper than the two preceeding swings and shows an obviously higher downside velocity.