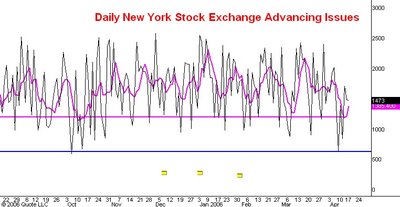 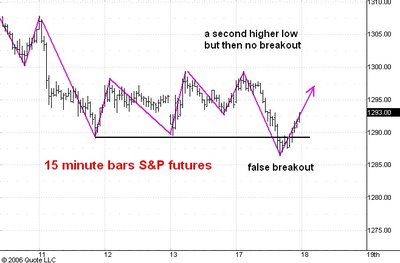 Here is a 15 minute chart showing regular hours trading in the June S&P e-mini futures. Above it you will find a chart of the daily count of the number of issues on the New York Stock Exchange which advance in price as well as the five day moving average of this number.

Earlier today I said that the breakout below last week's low at 1289.25 meant that the market would drop lower to 1278. But soon after the S&P started to rally and continued upward to 1293 by the close. This brought it back above the 1289 support level and made the move below 1289.25 look like a shake-out (with me among the shooken) instead of a break-out. If I am right about this the market will not drop below 1289 and will soon be trading above 1300.

There is an important piece of evidence supporting this shake-out interpretation and it is the behavior of the advancing issues numbers.

As you can see on the chart the daily number on April 7 reached a level lower than any reading but one during the past 21 months. That reading occurred in October 2005 just before the low at 1172. Note that since April 7 the daily reading has been zig-zagging higher while today the market made a new low for the drop from 1324. This is a bullish divergence.

Note also that the 5 day moving average dropped last week to a level last reached only at the low points of April and October 2005. While I don't place much emphasis on such "oversold" readings I do think they are significant when they occur at a higher low within an uptrend. This is the case for today's potential low within the uptrend from 1172 last October since the previous reaction ended at 1266.

Well Carl,
I respect your being flexible on your future outlooks regarding gold , silver and oil.
Appreciate your insight and charts.
Thanks!