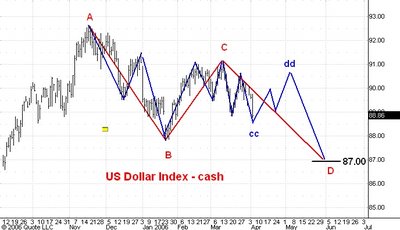 Here is a daily chart of the cash US Dollar index.

Like all corrections this one should have three obvious phases when it is complete. I've drawn these phases in red. As you can see I think the first two phases A-B-C are complete and that the drop is now in its third phase which will ultimately carry to 87.00.

The only difficulty here is in guessing whether the market will head straight down to 87.00 or instead see a three phase rally (blue cc-dd) before completing the drop to 87.00. I think we will see this three phase rally first and that it will be followed by the rest of the down move to 87.00.
Posted by Carl Futia at 11:44 AM