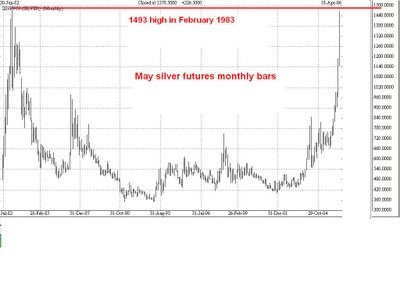 Here is a montly chart of silver futures going back to 1982.

As I write this May silver has traded as high as 14.49 today. The 1983 top is at 1493. Resistance at the 4 1/8 multiple of the 351 low stands at 1448. The market has risen nearly vertically from the 9.00 level two months ago. All these considerations tell me that this big up move in silver will end soon and near current levels. When it does silver will probably drop three or four dollars in just a few days.
Posted by Carl Futia at 12:02 PM

I was a commodities broker when silver traded at $40.00/oz. and gold at $900/oz (give or take). The chart looked just like your monthly silver chart. When the market finally broke, the rats were killing each other trying to get off the ship. It'll be fun to watch. I've owned Gold & Silver Mining Funds since Dec 2004. I've exited most of them. I've missed the top by a few points, but it's always been mine opinion that "Bulls make money and bears make money, but pigs go broke.