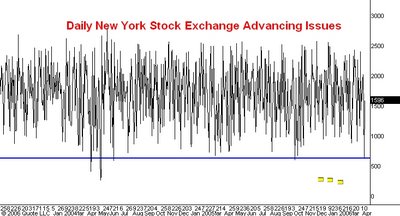 Here is a highly condensed chart showing the daily count over the past two and a half years of the number of issues on the New York Stock Exchange that advance in price. The blue line you see on the chart is drawn at the level reached by Friday's daily count of advancing issues.

Here is what I think is remarkable about this chart. You can see that the daily count of advancing issues rarely drops to a level as low as last Friday's. Only once in the past 21 months was it lower. This was on October 5, 2005 when the market was in the terminal stages of a drop from an early September top.

Yet both the S&P 500 and the Nasdaq composite reached new bull market highs on Friday before the big break started! Normally one sees a low advancing issues number like Friday's towards the end of an extended drop, not at its very beginning. So what was going on?

I think that a lot of traders have decided that this bull market is over and are trying to pick the top by selling breakouts to new highs. Maybe they will be right, but I don't think so. There is just too much willingness to fade this advance among technical types. So I am willing to bet that in a week or two the market is going to be right back at new bull market highs.
Posted by Carl Futia at 10:15 AM