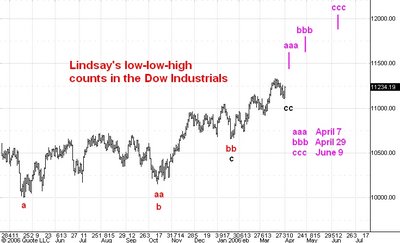 Here is a daily chart of the Dow Jones industrial average. I last discussed this chart here.

George Lindsay often used low-low-high counts to time peaks in the Dow. The idea is to count the calendar days separating two lows and add the result to the date of the second low. The date that results should be very close in time to at least a temporary market peak.

The chart you see above illustrates three such counts. The first one counts the days between the lows labeled a and aa. It projects a high for April 7. As you know I have been thinking that the first likely date for a bull market top is around April 25, so at best we'll see only a minor top on or around April 7. The second count is between points b and bb. This projects a top for April 29 and is in good agreement with a top-to-top count.

I have added a third count to this chart between the lows labeled c and cc. This count projects a top for June 9. This is in good agreement with the ideal time count from point 14 of the ongoing Domed House.

At the moment I am inclined to think that the late-April top will not be the bull market top but will instead be followed by a higher top in early June.
Posted by Carl Futia at 12:35 PM