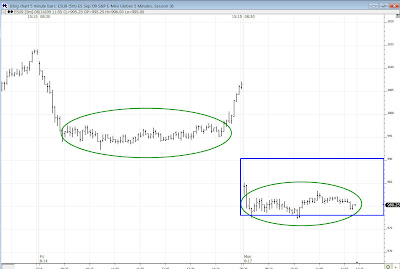 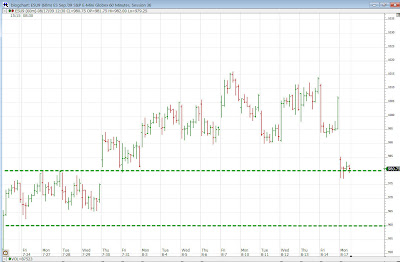 Here are two charts of e-mini day session trading. In the lower chart I have drawn what I think will prove to be two support levels. The higher one I mentioned last week. It is associated with the 979 midpoint, half way between the1291 high last September and the March low at 666. The lower level is at 960. It represents a drop of 56 points from the 1016 high, a drop that equals the biggest reaction the market experienced on during the March-May 2009 rally. It also represents a .382 retracement of the rally from the early July low at 865. In addition the June top in the June contract was at 957 (reached in electronic trading).

I still think that support at 979 has a good chance of holding. My attention is attracted to the fact that on Friday and again today the market had a sharp, high volume early break and then proceeded to trade sideways in a narrow range for several hours. This suggests to me that while the sellers are still in control they have not been able to scare many longs out of their position nor to attract more sellers via the negative price action. This can always change, of course, but at the moment I think it is a strong bullish indication for the rest of the week.
Posted by Carl Futia at 1:17 PM