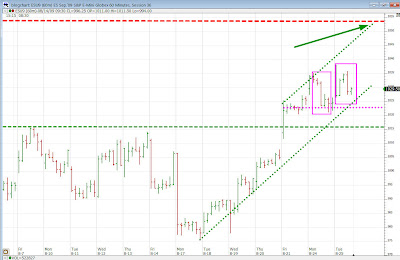 Here is a 60 minute bar chart of day session e-mini trading. I think the past two days' activity is part of a brief consolidation that will be followed by a move to the next upside target at 1054 (green arrow). There is midpoint resistance at that level defined by the 1442 top of May 2008 and the 666 low of March 2009. At 1056 the e-minis will have risen as far above the early August high of 1016 as they dropped below it on the subsequent reaction to 976. You can also see the upper channel line (green dotted line) that intersects the 1054 level during the next day or two.

There is midpoint support at 1023 (dotted purple line). A break off of today's 1038 high as big as yesterday's break would carry the market down to 1024 (purple rectangles). So I think the market will find support near 1023 today or early tomorrow.

Do you place any value in the failed attempt to hold onto new highs today (assuming we close under 1035) and the swift rejection of the probe to new highs as an indicator that we need to test 1023 or IMO 1016 before seeing 1054?

First off, I bought your book on Amazon when I was in the US. I have skimmed it and want more - just need to find reading time when the markets are closed and my kids allow....