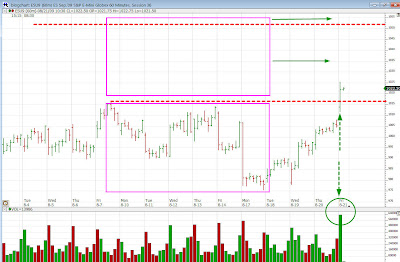 Here is a 60 minute bar chart of day session e-mini trading. I thought today's day session range would be 998-1015. Why? The market had rallied in Europe to the high of the recent trading range (1016, lower dash red line). It had gone up three straight days, so I figured that the 1016 high would induce enough selling to push the market downward today.

But I was wrong about this. At 10am Bernanke began talking at the Woods Hole conference. The market proceeded to stage a high volume breakout to new rally highs (green oval and green dash arrows). I find this action a very impressive show of strength coming as it did after three straight up days. I also note that the entire rally from the July low near 865 has been relatively uncorrected, yet another show of strength and more evidence that the market will reach 1120 by the end of October.

In any event I think reactions will be limited to 10 points or so until the market reaches resistance at 1035. This is the midpoint of the higher of two "stacked boxes" (pink rectangles) of equal height. The lower one is 40 points high and encompasses the recent correction. The top of the second box is at 1055. This is very close to the next midpoint resistance above the market at 1054 (higher dash red line). This is the midpoint between the May 2008 high at 1442 and the March 2009 low at 666.
Posted by Carl Futia at 10:39 AM

If this is the 3rd wave of the EW, then this bull market looks like it is coming to an end real soon... The 4th wave is down and then the 5th wave maybe ur 1120 target, and then back down???

What stage are we in the
"Three peaks with a dome house"?

You say that you evaluate "Europe". How? What index and with what kind of coefficient correlation? You haven't mentioned the evaluation of other markets in your older posts as part of your method.
I am interested cause this is the key part of my trading method. I evaluate the S&P500 moves to my country's market with fuzzy logic.

Why wouldn't the buying you denote necessarily also be just upside exhaustion?

have a good weekend.

The other day Carl posted a long article by another trader explaining his methods, which was very interesting. Carl said he operates in a similar fashion.

Nearly every move and signal can be read a number of ways, all of them with some validity. It's the 'x' factor...the analyzer's read of and feel for the market....that defines whether you get it right or wrong.

Carl's been right an awful lot during this run-up from March. I'd say he's got a good feel for the market's personality these days.

One of my blog readers pointed me your site. It seems we like to think alike and keep things simple in trading. I some how feel that this rally might correct next week before starting its run for 1100+

well John none can have a good feel for a prolonged period of time, or else the markets would be predictable. As far as I can see, there is a demand shock today, in a bullish context which means that the buyers have become fewer.

symmetry with the past is usually a good way to gather clues, but not definitive

I am not saying that I believe this to be a bull, nor am I saying otherwise, just that the mere opinion of being in a 3rd wave does not justify a hard conclusion that we are near the end.

One can study the past behavior, a host of indicators for bradth, momentum, etc to form a better opinion about the vicinity of a wave end. But, price is the final judge. Many fall mid way because they prematurely deem a wave has ended.