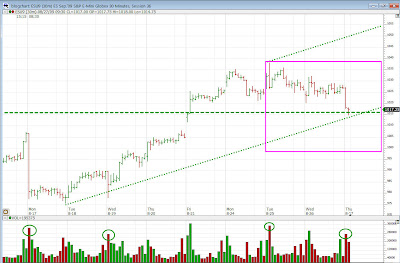 Here is a 30 minute bar chart of day session e-mini trading. I thought today would be a bullish day but as you can see sellers took control of the market from the open. I am still long one unit and intend to stick with it unless the market starts spending time below 1015.

If this support should fail then I would expect a break about equal to the August 7- August 17 drop which was 40 points (purple rectangle). I still think this is the less likely outcome and expect the drop below 1020 to prove to be a terminal shakeout rather than the start of a significant drop. In this regard I think it is significant that the volume this morning has not been unusually high when measured against similar early morning drops recently (green ovals). I would also point out that so far today's day session range has been exactly as big as yesterday's, making it likely that the 1014.75 level is today's low or very close to it.

If I am reading this market correctly it is forming a low point that will define the lower boundary of a trend channel (green dotted lines). The next up swing should carry the e-minis to the upper channel boundary which is close to or even above midpoint resistance at 1054 which is defined by the May 2008 high at 1442 and the March 2009 low at 666.
Posted by Carl Futia at 10:17 AM

I agree with you; where to add on?

Agreed as well and its proving to hold. nice call

Nice call Carl. I was beginning to think the market would fill the gap set on August 21st when it first fell below 1016. As you suggested, there is strong support in that area.

Now let's see if the market can rally to your next target at 1054.

Today does look very much like August 5th and August 11th with a BIG down first hour and then a rally, which eventually took us higher. Another positibe is month end is on Monday....

Still concerned about that gap at 1004.75 and would think that a move down to close it would serve as a better launching pad for us.

Carl: If we do go fill the gap, will you feel we then have further to go down?

Carl, unquestionably, you are the best reader of the mentality of crowds or "herds"!


I can always count on you to confirm my gut feeling. You have talent!

I hope al is well.

I think you're a AWESOME educator.

Good call there. The Bernanke upthrust prooved to be a good support.

I wrote this once before on your contrarian blog. Your book! It really helped me. Not your contrarian setups or your bullmarket beliefs but it made me realize that I was dancing to the bearish pipers tune. I really recommend this one to everyone that is in the market. It´s a eye opener.

Carl are you holding overnight these positons cause you believe too many people is bearish.

Is this a contrarian bet?

you sat out the tail end of a wave 4, good job!

Carl, I cannot see us closing out Monday, August 31st without nailing down your 1% up tick on the $INX 200 day moving average. From our close today a drop of more than 42 points is necessary over the last two trading days of the month to miss that mark, ain't going happen! My bullish ETF allocation is just iching to be increased. Let's Rumble!