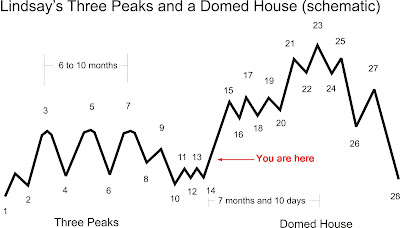 It has been more than 18 months since I last commented on George Lindsay interpretations of current stock market action. In my 2009 stock market forecast section on the three peaks and domed house formation I said:

Thus we should expect to see a major Three Peaks and a Domed House formation start to develop soon. The Domed House advance should take up the best part of 2010 and end the bull market which started from the November 2008 lows.

I think there is a clearly delineated major three peaks formation now visible in Dow industrials and in the S&P 500 as well as the Nasdaq composite. The daily chart of the Dow is at the top of this post.

I think the point 10 low that separates the three peaks from the domed house parts of the formation occurred on July 1. Point 14 occurred at the July 30 low. Lindsay theory asserts that point 23, the top of the domed house advance, should occur about 7 months and 10 days after point 14. This calculation predicts a top for the domed house advance for March 10, 2011 somewhere above the April 2010 top in the Dow.

There is one alternative, less likely scenario that is worth keeping in mind. It is conceivable that the January 6 top was point 3, not point 5. This change would make the April 26 top point 5 instead of point 7. In this alternative scenario point 7, the third peak, lies ahead of us and would probably develop a little below or a little above the April top in the Dow. The subsequent drop to point 10 in this alternative scenario would have to carry the Dow at least below its February 5 low, although not necessarily below its July 1 low.
Posted by Carl Futia at 12:39 PM

>Three Peaks and a Domed House<

That's certainly worth considering. I know that in May I got several high level intermediate buy signals. It usually takes 5-6-7 months for those to play out. Which takes us to, at least, October.

any idea how far above the April 2010 top that this would extend ?

Terry Laundry's T Theory is projecting a top in just a few weeks around August 26. Terry's work has been very accurate. It will be interesting to see whether Carl's projection of a top 7 month's from now turns out the be true or if we top out much sooner.

60% chance we resume the uptrend, tomorrow.

This has really gotten my attention. What level would the top in March most likely be? 1300? Higher? Thank you for youe work Carl, love the book.

i agree for a top too in Aug around the 20th based on Gann and Elliott calculations, but i think this will be a short term top and the major top i have is the first week of march 2011 to mark the end of the bull run from march 2009. a nice 24 month cycle.

Since yesterday,I spent hours on it.
I read your article on Saturday,November 11,2006.I am still to work on Elliott wave theory then I will read all your blogs on it,too.
So very obliged to learn from you.
God bless you!

From this chart, it looks to me that we are more likely to be around the area 27 than in the 14...

Carl, the market seems to be driven, at least in part, by economic data.The market will rise or fall, it seems, with job growth (or the lack of it). Can one integrate economic forecasts/data with technical analysis, or does one have nothing to do with the other?

You make a rather naive mistake in believing that there is a strong correlation between economic data, and equity prices. This clearly is not the case given a LIQUIDITY driven equity market.

It's a common mistake made by people that are new to the financial markets and assuming that the economic backdrop has a high correlation with the stock market.

We're at March 10 and the pattern is holding... creepy. I'm about to short the hell out of this market.