Breadth of the Market 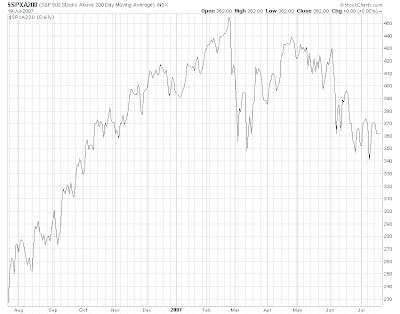 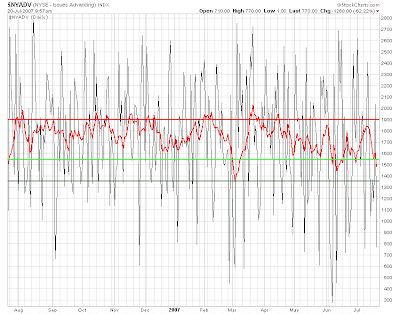 Here are two charts which are saying that the recent move to new bull market highs isn't as strong as it looks. I last commented on the advancing issues number here.
The first chart above this post shows the daily count of the number of issues traded on the New York Stock Exchange which advance in price (black line) and the 10 day moving average of this number (red line). Notice that the moving average has actually dropped to oversold territory even as the Dow closed at a new high yesterday!
I think this divergence is telling us two things. First, the averages are likely to head lower the next few days. Second, since the oscillator is already in oversold territory, the averages are not likely to drop much from current levels before another rally begins.
The second chart above this post shows the daily count of the number of issues in the S&P 500 which are trading above their 200 day moving averages. Note that the line has dropped to below the short term oversold levels it reached last March. I believe this indicator is sending the same message as the advancing issues oscillator.