Death of the Bull Market ? 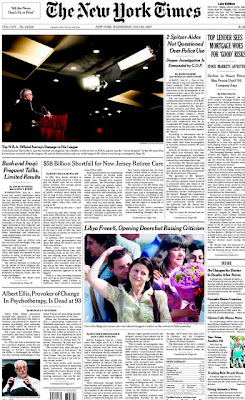 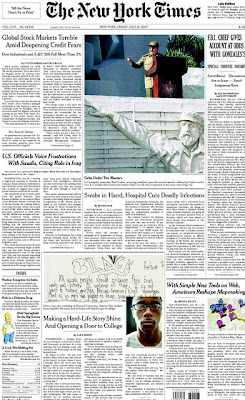 Is the bull market which started from the 2002 low at 768 in the S&P and 7200 in the Dow over? I don't think so. In my experience the market does not announce a long term top with a spectacular 10 day drop from its all-time high.
Instead I think it more likely that we shall see new all-time highs later this year and that the nearly 100 point drop in the S&P and 700 point drop in the Dow has brought the market close to an important low. I think that at yesterday's intraday low at 1465 in the cash S&P and 13330 in the Dow the averages were at worst only 1-3% from the ultimate low of this reaction.
One reason that encourages me in this view is that the drop has been accompanied by widely known, bad news on the front pages of many newspapers. In my experience the start of a bear market is accompanied by good news about the economy. Only towards the middle and end of the bear market does the bad news occupy the front pages and magazine covers.
To illustrate my point take a look above this post at the front pages of The New York Times which appeared this morning and this past Wednesday. Both front pages featured bearish stories about the sub-prime lending problems and the associated "flight from risk". I have always made money fading the Times and I don't think this will be an exception to the rule.
Posted by Carl Futia at 9:54 AM

"I have always made money fading the Times and I don't think this will be an exception to the rule."

WHO should have been faded ? Given that you have been a serial bottom picker a little humility on your part may be more appropriate, Carl. Since you keep adjusting your downside target as you do every other day you have to be right SOMETIME.

Dr Carl Futia, I live in Portugal, and I follow your posts since 2005,
I like to read your opinion, you are one of my favorite traders with Mrs Boroden, thanks!! and
Bom trabalho!!

It feels like the end of the world today..... I hope nothing bad happens.

Thanks for all your hard work on your blog. I have noticed you frequently use newspapers and magazines as your source for contrarian ideas. Given print's fairly recent decline, do you think it may be more appropriate to use the most frequented financial websites as a gauge for public sentiment? I notice there are many websites recommending to buy these dips.

Another down day, but it finally reached the 1465-1470 zone you were looking for. Further downside from here? I guess we all get to just sweat it out over the weekend. Sigh ... such is the trading life. Point #20 has to be around here somewhere. As a side note, I'm pleased to see GOOG is holding nicely above your support.

I have always been a big fan of the "Business Week cover" concept BUT i think that there is a big difference between a cover or lead article calling for the perpetuity of a trend and questioning the end of a trend. When the media calls for the continuation of a trend, they are late to the party; they are reporting the past...the obvious.

Also, for the Times to feature a bearish story on a day when the DJI was down over 400 pts intraday seems par for the course. They are not reporting on a trend that they have observed for some time.

Well, I just responded to your post about having manners then I see this. I'll still use manners. I must disagree with you. There is contrary analysis but contrary for contrary's sake is not contrary analysis. Newspapers reporting bad news is simply fact. I've seen people yammering about all of the bad news and that this cannot be a top. Yet, all of that bad news being cited has actually cost investors very real dollars. And, in some cased billions and billions of them. My point is that sometimes bad news really is bad news and shouldn't be faded. I can cite many bull markets that ended with a whimper or with the general public in a dour mood. Is this the top? Who knows. But much of my work argues the end is closer than expected.

I have been searching via Google & am surprised to find no comments about yesterday being a 90% down day and a glaring one at that. Whereas there were comments in early June about such significance.

Unfortunately, you got more bullish as we went higher & revised your time (longer to Nov)& price level much higher. More unfortunately, you have stuck to your higher price projection during this decline.

anonymous,
I don't know what you are complaining about - once 1535 broke, Carl quickly said we're headed down to 1500 on the futures - and after that, even lower.
His call for an eventual high is just that - a call. His opinion. It hasn't *not* happened yet, so there's nothing that has been wrong, so far.
Honestly, I don't know what the answer is. But I *can* say that he hasn't been wrong about this leg. YET. Maybe he will be. Maybe not.

Your reasoning is sound usually, but don't you think there is a possibility that the media has resolved NOT to report any good news during the Bush presidency? I've followed your column for a couple of years and found it interesting, but I sold when you moved your "domed house" numbers the last time. THAT seemed like it was driven by pure optimism. I felt stupid when the Dow want to 14K, but not so much so now.

"It hasn't *not* happened yet, so there's nothing that has been wrong, so far.
Honestly, I don't know what the answer is. But I *can* say that he hasn't been wrong about this leg. YET."

So, when by your parameters do you know that it hasn't happened ? When it hits zero ? Which it can't do. So by your that projection can never be wrong.

BTW, i must have missed the catechism chapter in all of the technical analysis books. I go to church on Sunday not M-F.