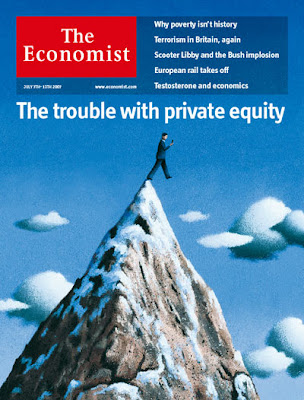 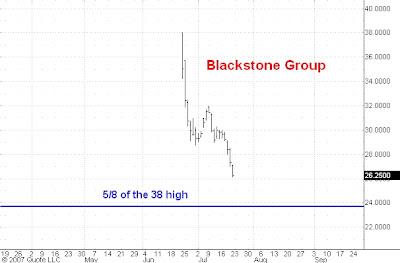 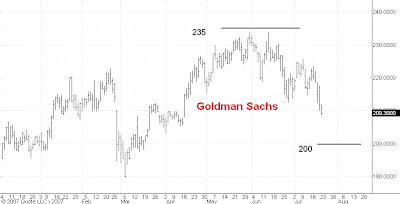 Here are daily bar charts of two of the companies whose principal activites are fueling the private equity buyout boom which has fueled the current bull market, Goldman Sachs and the Blackstone Group.
In the last Tale of the Tape I said that I thought GS was about to break above resistance at 233 and move to its next upside target. Instead the reaction from the 233 level has continued and I think that GS will drop to 200 or so before its bull market resumes. I still think that the 250 level will be seen later this year.
The Blackstone Group (BX) went public at 31, rallied the next day to its high at 38 and has been coming down ever since. I think it will find support near 23.75 which is 5/8 of the 38 high. After some sideways action I Expect to see BX rally to 50.
I do not think the buyout boom is even close to being over. You can see the front cover of the Economist magazine a couple of weeks ago at the top of this post. It shows "private equity man" about to tumble into the abyss. I would find this cover more bullish if it came after a substantial drop in the stocks of the buyout barrons. Nonetheless, I think it is unlikely that the Economist has called the top of the private equity boom, so I think GS and BX are still in bull markets.

Wow having thought you were basically with the trend for a while now I am surprised at your recent views on equities. I am beginning to believe that the top of your domed house is either already in or will be very soon.

We use to be in agreement. Now one of us is WRONG. No offense Carl, but my portfolio hopes it is you who are wrong :)

Advance/Decline line is trending negative even on UP days.

Number of new highs and new lows are both very large on up days. Not the sign of a new bull leg.

Everyone gets thing wrong from time to time. Again I seriously hope it is you this time and not me and my brokerage account :)

I love the pessimism in these comments. They reflect the majority opinion -> always wrong.
Look also at the total put/call ratio (use 15 day moving average).
You will see it is at levels associated with market bottoms, not tops and it trended higher for the last year. This shows a high level of skepticism (or despair) of the majority of the market players. Now, bull markets thrive on this despair and the so called "wall of worry" is ready to be climbed by this market. My 2cents.

Mukesh, try reading this blog from the very first post. Then you will understand.

S&P will move to 1832 before it starts to falter significantly. We are in a major bull market thanks to the sliding dollar. Anyone fancy $4 = £1!! I may get a penthouse apartment in Manhattan yet!!

you had posted that nasdaq would be range bounded between 2650 to 2750 and it won't go higher until we see a reaction as big as the one we saw in late march..

do you think that reaction(correction) has started or do you expect that after we hit 1595 on s&p? thanks