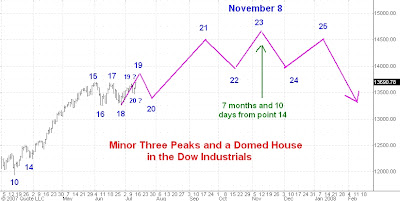 Here is daily chart showing the domed house portion of a minor Three Peaks and a Domed House. I last commented on this formation here.

This domed house is evolving pretty much as expected so far. The Dow still seems to be in the midst of the "five reversals" portion of the domed house which consists of points 15 through 20. There is some chance that yesterday's low was actually point 20 but this makes little practical difference for the broader implications of this formation which I have drawn on the chart.

The Dow appears headed for point 23 which is due in November at roughly the 14600 level in the Dow.
Posted by Carl Futia at 10:09 AM

I like your question marks within the graph, as yes, its pretty much as expected (save for yesterday morning's - short lived - view down, as I read your comments of a revised anticipation of a further fall; I was expecting 13350 rather than 13200 and a triangle forming).

As you apreciate this is a tricky call now.

In my view the market has for some time been in a long term dome (20 to 26) formation, but within the shorter time scale, in which we trade, I had thought we were (two days ago) on the 19 to 20 down, but am now watching with interest for some clarity.

Cool Carl...the scenario you pointed out is working out so far...unbelivable strength in the face of higher oil, sub-prime woes, higher interest rate, poor consumer sentiment...price is king and doomed house is the attractor!!

How will you know for sure when we are at Top #19 or Bottom #20 of the Domed House on the DOW?

Carl, I have posted before that I don't really buy into your short time frame (having this 10 year view of the pattern) but your blog is very interesting and if your right (and I would rather deal in very distant futures and not think about 2 to 3 months) could we now be on the final climb to the summit? I hope so as I would like to go V short sometime soon. Whatever... I have not paid into the blog fund - you don't need it.

HI Carl,
Inspired work on the Three Peaks and Domed House with point 10 coming in nicely.