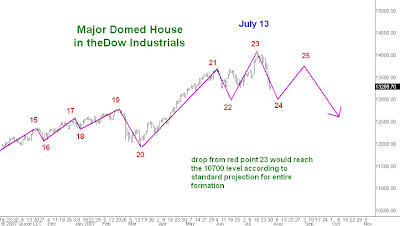 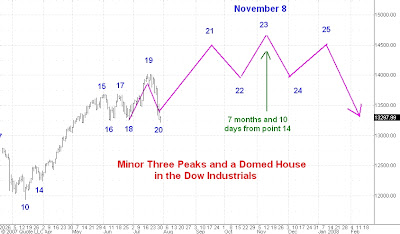 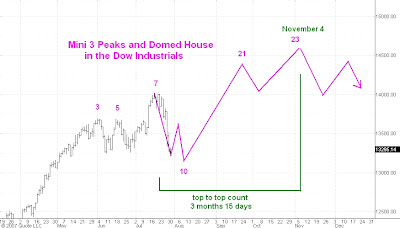 I have been following various examples of George Lindsay's Three Peaks and a Domed House formation on this blog for two years. My last post on this subject can be found here. All of my George Lindsay posts can be found here.
The first chart above this post shows the most recent development in the market which can easily be interpreted in the context of the Three Peaks and a Domed House formation. It is only a small, "mini" formation. A big, "major" formation shows at least a 6 month interval between the first peak (point 3) and the third peak (point 7). But in this most recent formation we have only about a 6 week interval between the first and third peak.
If this is indeed a mini- 3P and DH we can conclude that the market will follow roughly the pattern shown by the purple lines in the first chart. Of most significance is the prognosis that new bull market highs lie dead ahead. The uncertain aspect of any mini formation is the timing of point 23 which should coincide with the bull market top. In this case there is a clearly defined, compact top in mid-July and from this a Lindsay top-to-top count of three months and 15 days brings us to a projected point 23 around November 4.
This date coincides nicely with the prognosis offered by the minor Three Peaks and a Dome House which is labeled in the second chart above this post. In this formation the recent reaction fits nicely as the last downswing in the "five reversals" part of the domed house (points 15 through 20). The prognosis here too is for new bull market highs dead ahead. The 7 month and 10 day time interval which is standard for projecting point 23 in a Domed house is generally started at point 14. In this case it calls for a top near November 8.
The third chart above this post shows the progress of a full-blown major Three Peaks and a Domed House. The first peak in this formation (point 3) is not shown on the chart but occurred in January of 2006. Even though the formation appears to have timed the recent top exactly I still think it is the least likely alternative of the three domed houses shown above this post. However, if the market should rally from current levels into September without making new bull market highs I shall probably change my mind about this. Such a development would be particularly significant if the advancing issues oscillators show weakness on the rally to what could turn out to be point 25 in September.

Your analysis provides you several different answers. This is unfortunate but not really that surprising.

Do you invest along with one of these analysis when this happens or is this just for academic interest?

What is the difference in the eventual downside target between a major and minor formation?

Best blog on the net.

I find difficult (not trivial) to identify the Lindsay 3P&D pattern in the DJIA.

If you take a look to the Bank Index (BKX), the NDX or the Nasdaq you will see really easy to identify 3P&D patterns.

Hope this can help, if needed I can send a labelled chart (need a mail)

Sorry for my poor english ...

Thanks for your excellent comments on the Domed House, again. I would suggest a different view, that your "Major" Diagram could be drawn to show the July 16 high as Pt 21 and today's low as Pt 22. Simply by pattern recognition, your attribution of Pt 22 to the mediocre double lows earlier in July is a poor match--- it should be a steeper drop into Pt. 22, and what we have just had qualifies for that. I am expecting Pt. 23 about Labor Day.
I do agree completely with your "Minor" diagram. Amazing, isn't it?

Sorry, just want to add one more thought. Could be that Minor Point 21 comes in on the Labor Day timeframe and Major Point 23 is not until November--actually, for other reasons I think it will not be until Dec-Jan.