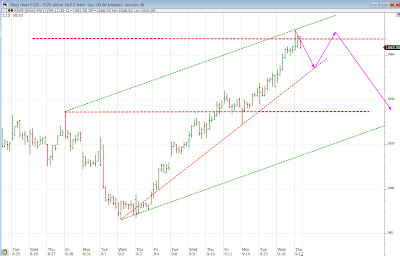 Here is an hourly chart of day session e-mini trading. The market was more active and volatile this morning than it has been all the way up from the 987 low in early September. There was midpoint resistance at 1064 and the October 2008 rally high was 1067 (higher horizontal red dash line). The market took out that high and then sellers took over. This looks like a temporary top to me. I think a break of about 35 points is starting and should carry the market down to its late August high near 1035.

I expect the initial break off the high to stop near 1055, about where the steep, red dash trend line is currently found. This initial break should be followed by a rally back close to today's high (or even a little above it). The final leg down in the reaction should then carry to 1035 which in a few days would also be roughly the level of the lower channel line.

Once this correction is complete I expect the e-minis to resume their move to the 1120 level.
Posted by Carl Futia at 12:14 PM

You are amazing, Carl. Sorry for having doubted you about the 35-point break, as yesterday the market was going up in a fast elevator.

Along with ur day ranges, can u also include if its going to be an up or down day? Don't know if its possible, but u have been MONEY with ur daily ranges and direction of the market so i cant see why u cant predict if its gonna be an UP/DOWN/SIDWAYS daily market!

There has been some talk about the unfilled gap on SPY, from Oct 6, 2008, just above today's high. The equivalent gap for QQQQ and IWM was filled.

Carl, which is riskier?

2] Going short at high of the day.

To me, staying out of this crazy market is a good idea till conversion of the uptrend into downtrend has been confirmed.

You are the Man. Keep up the great work.

Carl
Do you think 1120 will be the top?
Kind regards
Mav

Carl
I've been reading your blog for approx 18 months and recently your book........when you get a series of silly questions as bove, do you become a drinking man?

Yes Kishore, the sp500 weekly gap made Oct 2008 is meaningful and I mentioned this not long ago on my blog. Carl is on the money in his expectation of a correction and I concur. But I can tell for certain that trading this correction will be anything but easy. Absolutely everyone on trading floors all around NYC are expecting it! In any case, tomorrow option expiration should be very interesting. -MK
www.marketkarma.blogspot.com