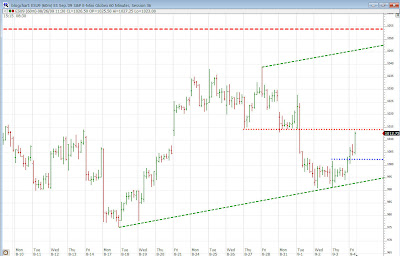 Here is a 60 minute bar chart of day session e-mini trading. The market has accelerated above the high of today's range estimate at 1010. I think this means that the move to 1054 is underway.

If I'm right about this reactions along the way should run no more than 10 points or so. Right now the breakout level for this up move is at 1002 (blue dotted line) and this should be very strong support for any reaction. Next minor resistance on the way up is at 1015 (red dotted line), the midpoint between the 1291 high of September 2008 and the 739 low of November 2008 as well as the level of two recent intraday lows.

Once the market moves past 1015 it will confirm my suspicion that the supply shock that hit the market Tuesday was just a successful attempt to shake out weak longs and to build up an aggressive short interest in the market. If so, the move to 1054 should be a quick one because a great deal of technical strength has been built up by the shake out.

I am sticking with my view that the e-minis will reach 1120 by the end of October.
Posted by Carl Futia at 12:15 PM

We should expect a sell-off on this Friday afternoon before the long weekend, as that will also be the wave 5 down of the down move that started on Sept 1.

sanjay: aha. same here on nasdaq100, we have a clear downtrend channel now. not sure about s&p but on nasdaq100 we are gonna be at 1500 next week

wow, posing and postings are rather bearish for what is still late summer.

There was no sell-off this afternoon. Yet another humbling experience!

Lame excuse: I "forgot" that it was a trend day and the trend was up. The breadth was excellent. TICK, TRIN and VIX all favored an up move and the price up trend was unrelenting.

Nevertheless, wave 5 down of the down move that started on Sept 1 is still due.

Either way, Monday should be down, unless the new wave 1 up has more juice in it.

A word to the people who haven't been here long:

Carl is a tremendous long, medium and short-term forecaster and an even better trader (he has a great eye for short-term, price movement and very good discipline). He has, however, been wrong, and consistently wrong, about the bear market lows in 2008. He has pointed this out on this blog and you can see his archived posts from 2008.

Carl's method last year was to continue to post that the next support level would hold and that the market would see a huge rally. This kept happening from the 1200 range to the 666 low, when he was eventually correct. Now Carl's guesstimates are exactly that -- guesses -- but not everyone has the risk management skills that Carl has. I worry that those here who learn to follow Carl blindly, based upon his excellent record in bull markets, may really suffer when the market turns.

It may also be worth pointing out that Carl's blog trades during the bear market of 2008, a time when he was consistently "wrong", resulted in a profit of 86% per 15K of trading capital.

It is certainly worth pointing out, sir! Thank you once again for the site and for posting your trades.

I like that in your picture you have binoculars. However, with your risk management skills, you really don't need them.

For what it's worth, I think this move up is a bull trap.

- lots of MACDs have rolled over.

- I also believe that the United States is in a secular Bear Market but that much of the rest of the world (especially China, India and the resource rich countries) may have begun or still be in a secular bull. In my travels in and communication with people in India and China, I see a completely different psychology and world view from the one I see here. America now does remind me of Japan in the 1990s.

There are not many perfect traders in this world.

Most traders have a bias and an opinion about the market direction. Otherwise, it would be impossible to take a trade, i.e. without a conviction.

An honest approach, without any denials, is a primary hallmark of a successful trader. Carl exemplifies this in his postings and trading, besides illustrating a very good understanding of crowd behavior that affect the market movements.

He is highly organized and his postings are concise and precise.

The entire kaleidoscope of sights and sounds, comprising the market, is too overwhelming for any one single individual to ingest, reflect and act upon and then communicate to others in a language that they can understand. An impossible task, without help from others!

Carl, you are doing a great job. Keep it up!

Hi Carl... Love your blog and i'm looking forward to reading your book... should be here any day now (Australia)

All I can say is that I've been wrong betting against Carl's analysis.

I follow two blogs. This one and Tim Knight Slope of hope. I like to read their bearish opinions because it helps the permabull in me to be more realistic. I was surprise to see you post there Carl and not being eaten alive by the bears...They are a very pessimic bunch to say the least!