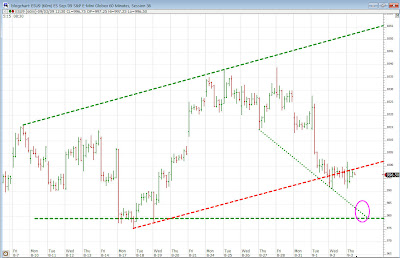 Here is an hourly chart of day session e-mini trading. After Tuesday's supply shock the market has traded quietly in a 10 point range. I take this to be very bullish action. Why?

Normally a supply shock transfers a large number of contracts from longer time frame traders to relatively short term traders, more contracts than the short term traders collectively want to hold in their long positions. Consequently prices must subsequently fall quite a bit further. They must drop to the point at which longer time frame traders again become willing to take over the long positions that short time frame traders don't want to hold. This usually involves a big move in prices. Supply shocks typically kick off extended trends that have few reactions.

When a supply shock is instead followed by a balanced, quiet, and trendless market I begin to suspect that things are not as they seem to be. It begins to look like the selling from longer time frame traders was really an attempt to drive the market lower, to shake out weak longs from their positions and to attract short sellers to the market. The fact that the market is trading sideways and has not rallied is more evidence that the longer time frame bulls are trying to tire out the weak bulls and entice selling by short term bearish traders. All the while these longer time frame traders are building a long position which will cause a very substantial up move from current levels.

But first I think the period of accumulation that began Tuesday afternoon will end with a terminal shakeout. I expect the market to make a quick trip below the 990 level, probably into the 980-85 range. Tomorrow's employment number should provide a good excuse.

Terminal shakeouts are usually followed by fast moves in the opposite direction. I think the e-minis will move quickly back above the 1000 level on Tuesday (Monday is a holiday in the U.S.). This should prove to be the early stage of a move to the 1054 level.
Posted by Carl Futia at 12:59 PM

According to the COT report, many people with shorts have covered. The short interest is now really low. Maybe, the bears have learnt their lesson from the relentless, merciless upward move.

Carl, I totally agree that the the short interest needs to be built up before a meaningful rally can take place. But the market is not going down either to interest the bears. Having being trapped so many times before, will the bears bite this time??

Your views fit with mine as well... I would think Tuesday am would be a very good time to buy, though it could also be Wednesday.

We have quite regularly made either significant tops or bottoms around holidays, particularly the day after the holiday... though in the case of the 4th of July, it took a few more days to bottom. Memorial Day was the morning after....

One can never forget the day after MLK day in Jan 08 or the top after Thanksgiving in Nov 08.... Given the current momentum is down, Tuesday or Wednesday does seem like a GREAT change of direction day....

beg to differ. A selloff followed by narrow range trading is often a harbinger of even more selling. It is as if sellers/shorts are taking some much needed rest (confusing bulls by this process)//
My model is screaming SELL and i stick by it.

sanjay, Carl has talked about a shakeout before the up move. Are you also not talking about a sell-off. So, why are you begging to differ?

The longer term is dictated by the daily charts, and the trend is clearly up on daily charts. This is just a pullback. The trend does not change until the trend line is broken, followed by a failed retest.

Your sell signal must be for the short-term or does your "model" even care about the trading time frame?

Volume is so light....manipulation is easy.

I'll go further and say that this sell off will take the S&P to 940 which is where resistance was before this rally took off from 868.

Any sell off to 940 can still be called a mild pullback. Now the bigger question is whether the S&P will go below 940 and how far below 940 over the next couple of months before it resumes the uptrend. I don't have an answer for this one right now, It may or may not break below 940, I see chances as 50-50. The only reason this is possible is because we have not seen a major pullback since March, and one is surely coming at some point.