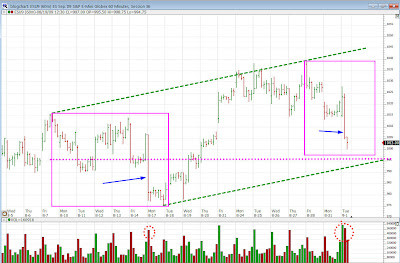 Here is an hourly bar chart of day session e-mini trading going back to the beginning of August. The market started the day with what I thought was a really convincing show of strength. After the first hour the 1035 or even 1040 level seemed within reach today. But sellers then took control of the market, and the subsequent break below yesterday's low at 1014 encouraged more selling. Certainly today's action is a supply shock. The question right now is just how far down will this move carry.

One thing worth noting is the similarity of today's action to that of August 17 (blue arrows). In each case the preceding day developed a narrow trading range followed by a late rally. On the 17th the market dropped in Europe and opened near about 9 points above its subsequent low with a high volume of trading during that first hour. Today the volume came in on the second hour. After the second hour on the 17th the market was within a few points of its reaction low. I think something similar will happen in the current situation.

Note the lower trend channel line (green dash lines) which stands currently near 993. The 996 level is midpoint support (purple dotted line). Finally, a drop from 1038 that is as big as the early August break would end near 998 (purple rectangles).

These considerations all lead me to conclude that we are seeing a normal reaction in an uptrend , a reaction that is much closer to its end than to its beginning. Once the market stabilizes I think its next signficant move will be upward to 1054.
Posted by Carl Futia at 12:13 PM

Thanks for helping us in making sense out of today's market action. I agree that the larger trend is still up and upward movement will resume.

Moreover, the US government has too much at stake here. They will try to maintain the impression of us staying afloat as long as possible.

The internal market structure (expansion of lows among other signs) is warning that the weakness may be sharper than just a normal corrective action.

I don't get the contrarian attitude--seems outdated and a bit simplistic. A trader with a fairly consistent bullish emphasis is contrarian? How is that being contrarian? LOL. Everyone thinks that way, that the market will tend to go up rather than down in the long run.

Keeping things basic and simple (a solid approach to be sure) does not mean that you ignore the internal structure of the market! Without that solid foundation, all your guesses are just mostly whimsy. But with a good risk management, I suppose even whimsy could be somewhat profitable. Moi, I rather be fact-based in my approach.