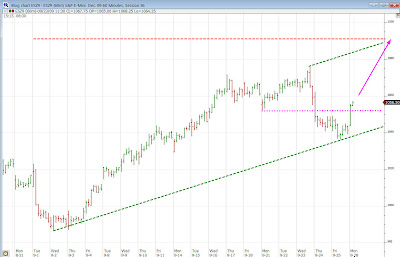 Here is an hourly chart of day session e-mini trading. The reaction low was established last night at the 1035.75 level (not shown on this chart). This morning the market has moved sharply higher and has moved above resistance shown by the purple dotted line. This looks like a breakout from the trading area established last Thursday and Friday between 1036 and 1049. At this juncture the 1049 level should act as support.

I have drawn a new trend channel based on Friday's day session low and the low of September 2. During the next few days the top of the channel will move up to the next significant midpoint resistance level at 1091 (horizontal red dash line). This is the midpoint between the May 2008 high at 1442 and the November 2008 low at 739. So I think the next stop for this market will be this resistance level.

Looking further ahead I still think the e-minis will have traded at 1120 by the end of October.
Posted by Carl Futia at 11:11 AM

How did you know that was the bottom before the market opened, since not too many ES contracts were being traded in the after-hour sessions?

If we want to how Carl knows, we may need to become Carl.

It is not possible to get inside the head of someone else. And even if we could, we will be all confused!

Carl, keep up the good work!

Why don't we just enjoy the broiled chicken sandwich at Carl's instead of asking for the recipe.

But, unfortunately, I just remembered, I am a vegetarian.

Well, i think he looks at some European indices. He had mentioned somewhere about Europe. I in Europe watch S&P he in the US watches Europe...odd stuff.

Carl,
I wonder if you have decided to completely sit out until more clarity? Or if you have opted to not post a part of your bets on the blog...

The lack of participation in today's rally is a bit concerning...any thoughts on today's volume? Any red flags for your target? The declining volume hasn't really been a factor yet, I am wondering at what point will it precede the price action.

So it is... thanks for the update. I should brush up on my religious holidays.