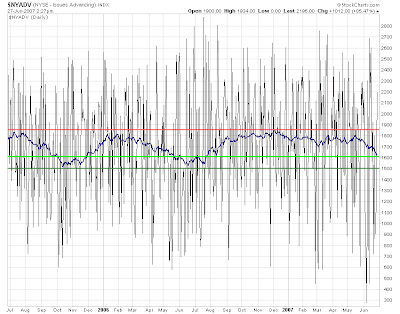 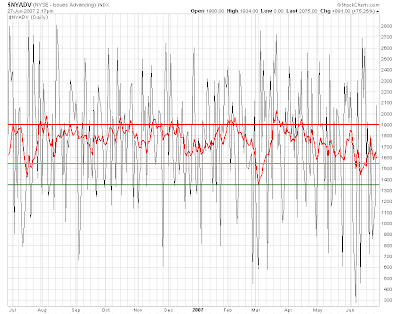 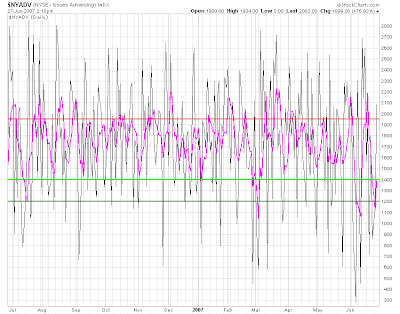 Here are daily line charts of the number of issues traded on the New York Stock Exchange that advance in price. The purple line on the first chart is the five day moving average of this number, the red line on the second is the ten day moving average, and the blue line on the third chart is the fifty day moving average. The first two charts show activity over the past 12 months while the top chart shows activity over the past 24 months. I last commented on this indicator here, here, and here.
Today the averages made new lows for the reaction from the June 1 top but both the 5 day and the 10 day moving average of the daily advances made higher lows relative to the lowest levels seen since the June 1 top. Moreover, the daily number of advancing issues shows a sequence of higher lows even as the S&P averages have moved lower during the past 10 days.
I regard this action as a definite bullish divergence and as confirmation that a substantial upmove lies ahead.
The last time I disucussed the 50 day moving average it was hanging about at levels which were relatively high and not close to the oversold levels which would mark the end of a substantial reaction and the start of an important rally. However, since that time this moving average has dropped close to the oversold line which marked last June's low.
I think this is the first clue that the upcoming rally may last longer than I have been expecting. Currently I am expecting a high in mid-July, but the 50 day moving average of the advancing issues number may be warning us that the next top will be delayed until this moving average can again approach overbought levels, an even that would normally take at least tow or three months to develop.