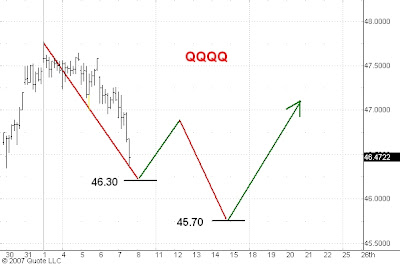 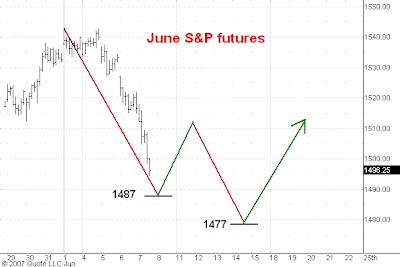 Here are hourly charts of the June S&P futures and the QQQQ's. I last commented on this market here.
Tomorrow I shall be moving to the September S&P's which are now trading 15 points above June. The Spider chart looks just like the S&P chart you see here if you first divide the S&P price by 10.
As you can see the reaction I was expecting has developed into something much bigger than I had anticipated. I think that the market is in the first stage of a three stage break. We should see the S&P's make a temporary low near 1487 and then rally 20 points or so. The third stage should carry the S&P's to a more important low near 1477 (1492 basis the September contract).
The Q's should bounce temporarily from 46.25 and then make a more important low near 45.75.
Yesterday I commented on the significance of the advancing issues numbers. Today's advancing issues number is likely to be even lower than yesterday's. This is one factor that makes me think that the final low of this reaction is still a few days away.
Finally, I suspect that this break will turn out to correspond to the drop from point 21 to point 22 in the minor and major domed house formation which I last discussed here. The implication of this view is that the next rally to new highs will be the final leg of the upmove from the March low and possibly for the entire bull market from the 2002 low.

great site and the analysis is very helpful to me. if the proposed final leg up defines new highs and a top for the bull market since 2002 low, how long to you foresee the bear market lasting?

from your recent posts, I gather that you are bullish on the market for the next decade or so, and if the domed house scenario plays out, do you see a new bull market starting in or around '08?

thanks for your time -ds

Carl, just sent you an email (your paypal email). Please confirm if you received it. Thanks,
Babak