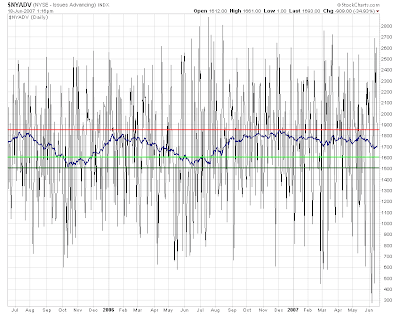 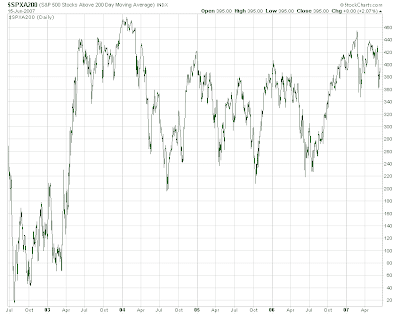 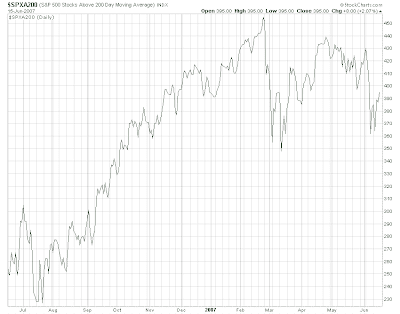 Here are three charts which I like to use to get a sense of the market's vulnerability to an extended decline of at least 10% or so. This is a longer term version of my favorite indicator, the advancing issues numbers, which I last commented upon here.
The first chart shows the daily count of the number of issues in the S&P 500 index that are above their 200 day moving averages at the close of trading each day. You can see that this number peaked in February 2007, and as the S&P 500 reached new bull market highs in May the indicator itself made a lower top. Now the S&P is attempting to make new bull market highs once more and I think it will succeed. If it does I think it is a good bet that the "above the 200 day moving average" number will make an even lower top than it did in May. If this happens I think that the drop of at least 15% in the averages that I have been expecting will start soon thereafter.
The second chart above this post shows the same indicator but over the longer time frame of the past 5 years. You can see that from this perspective the entire advance from the June 2006 low looks like one continuous uptrend which is getting long in the tooth. If we do see a divergence in the next couple of months as I think we will, the stage will be set for a drop in this indicator back down to the oversold levels it reached in June 2006 or below.
A somewhat different view of the market is shown in the third chart above this post. It is a daily line chart of the number of issues traded on the New York Stock Exchange which advance in price. The dark blue line is the 50 day moving average of this number. The horizontal red line marks what I consider to be an "overbought" level while the horizontal green lines show "oversold" levels.
There are two important observations to be made about this indicator.
First, June 2006 was the last time it visited oversold levels. More than a year has passed since then and this is an unusually long period of time for this moving average to stay above oversold levels. So this warns that a significant drop is growing near.
Second, you will see that the moving average has made a sucession of lower tops since December 2006. It may well be on its way to yet another lower top over the next month or two. If so this will constitute a striking bearish divergence and will be yet another piece of evidence that an important break lies ahead.

Carl,
trying to get in touch with you. Sent an email to topos8 AT aol . com but not sure if you received it.
Please contact me via babak AT tradersnarrative DOT com
Thanks