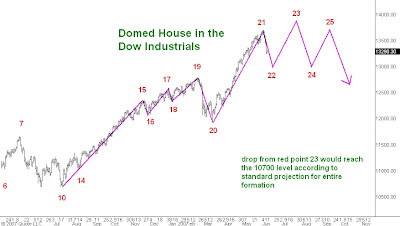 Here is a daily chart of the Dow Industrials showing my estimate of the market's current position in one of George Lindsay's Three Peaks and a Domed House formation. The entire formation began in 2006 and the Domed House portion started in July 2006 at point 10 on the chart above. I last discussed this subject here.
As you can see I have labeled the recent top as point 21 and I think the market is on its way to a low at point 22 which in the Dow should occur near the 13000 level. The subsequent rally should end near 13900 and at the moment it seems likely that it will mark the end of the bull market which began in 2002. The drop following point 23 should carry pretty close to the 10700 leve at which the entire Three Peaks and a Domed House began.
Posted by Carl Futia at 11:36 AM

Don't you mean the drop from point 25 will reach 10700?, I don't understand why you would say the drop is from point 23 when you have drawn another peak (25) on the chart

I was wondering about the article you posted in the begining of the week, you mentioned that you were extremly bullish on the market..and form this article you sound like you are only expecting 13900 and then much bigger downside? am i understanding anything wrong or has your opinion changed? thanks

You wrote previously to get on with your life, as the market would be much higher 15 years ahead.
Now you are saying the bull market will be over shortly.
I enjoy your writings, but am confused.
Have you changed your mind??

i'm also a bit puzzled by the earlier enthusiasm in the market a few posts ago. now it sounds as if we should pull out all of our long positions at point 25 and leave the market for an extended period of time because the Bull Market will be over sometime in July.

Anon, the drop from 23 would include the drop from 25, Carl just skip that step. But, like Shawn, I'm a little confused. Carl, are your expectations that we start another run after the the 25 low ?

nick/fiona. we can still be in a long term bull market and have a 20-30% correction. thats normal bull market behaviour.

What is the longer term expectation after the point 25 drop to 10700?

It is all about time horizon. Carl is long term bull, intermediate term bear and short term bull. Usually, any correction in S&P more than 20% is bear market.

The Questio is: If the point 23 is by LATEJULY, then when will the 10700 arive? or How do the wave structure look like?Point 25 will be a LOWER HIGHthan point 23.
...... this will probably be a nice little correction we need to move HIGHER

Why anyone tries to make market predictions is beyond me. It can't be done. Why anyone would seriously consider making investment decisions based on somebody elses prediction is even harder to understand. Heck just make up your own prediction. It has just as much likelyhood of coming true. Jeesh

nice to see your keeping your short term veiws in tact . although your long term manic bullishness has now confused
most of your readers . some cant see the forest from the trees .

The market is a big dynamic flux of n number of elements.certain factors pre or post pone events.A good trader is aware of this sudden events and change their forecasts accordingly.carl has the gift of clarity and the braveness of putting it in print for others to see and comment.
http://www.manojsai.wordpress.com

Thank you for your updated views on the Domed Dow. I always appreciate your blogs. Its worth looking at the DOW back to 1997 as then you might see a George Lindsay type picture, but spread out over ten years, which would appear to suggest 23 having been just reached? I wil though bear in mind your recent suggestions.

Hello Carl, I had posted this last Friday, but probably it didn't transmit... Your focus on the Domed House Pattern is so useful, and I think you could go back to the minor pattern you were tracing within the larger Domed House and see the recent action this way:
the June 1 high is Minor Pt. 15; Pt 16 will be by Friday or maybe is already in; minor highs 17 or 17 and 19 will comprise major point 21 sometime in late July or early August; and the coinciding of minor and major Year's High will be point 23 that will occur over (before or after) Labor Day weekend. This allows for a lot of slow rangebound summer trading in between all these points of the pattern. thanks for your thoughts,

Let me guess that 23 will end the 5th wave(high) 24 =A, 25=B lower price than 23 of an ABC correct. We then will blast off into 2008 starting over with wave 1
You are looking for a normal correction that will get scary, for sure!
Jerry O
Ps personally I look for an Oct crash type bottom. Thanks for your public work!

carl- first time reader of your
blog/column. faascinating- I will
be back. After reading through
the list of emails am wondering if
you respond at another area? You got me with your goog and bidu work. read the 'confessions...'
book on early investor- very interesting. thanks for your work-
will stay tuned and hope to learn a
thing or two. scottj