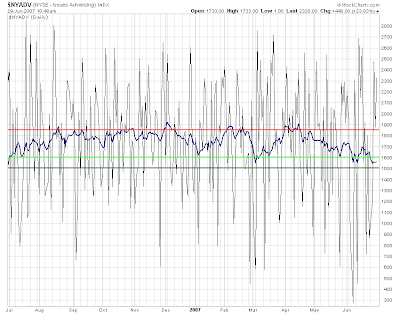 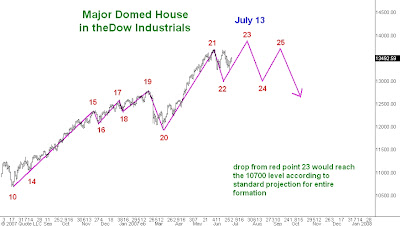 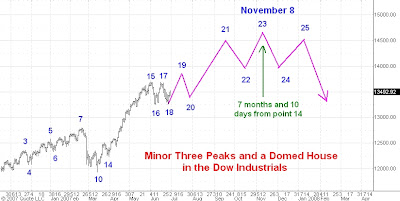 Above this post are three charts. The first two are daily bar charts of the Dow industrials on which I have labeled turning points of the minor and of the major domed house formations I have been following. You find my previous posts on this subject here. The top chart is a line chart of the number of issues traded on the New York Stock Exchange which advance in price along with the 20 day moving average of this number. I last commented on this indicator here.
Take a look at the top chart of the daily count of advancing issues and its 20 day moving average. The significant thing I see in this chart is that the 20 day moving average has reached its lowest level of the past 12 months. I exepect this moving average to start moving upward toward its overbought zone and during this upmove I think the Dow will make new highs.
If I am right about this then experience shows that the Dow will make its ultimate high about 2-4 months after the 20 day moving average makes its high. In particular, this would seem to rule out the projection of the Major Domed House you see in the second chart which calls for the top at point 23 on July 13.
I think the Minor Domed House interpretation you see in the first chart is the more likely outcome in view of the behavior of the advancing issues moving average. It calls for a top about 7 months and 10 days after point 14. This is Lindsay's standard time interval for the Domed House formation and it projects a top for November 8 of this year.
It is possible to stretch the Major Domed House so that point 23 comes near November 8 too. To do this one must erase the labels for point 21 you see in the chart. Counting forward 7 months and 10 days from point 20 in the Major formation brings us to October 24 as the projected point 23.
Posted by Carl Futia at 10:45 AM

Does the 20 day average of advances normally diverge from the price action at major tops? That is, that it won't make a new high as the market moves higher? Since it is making a 12 month low, does that mean the advance is on its last legs and the July 13 top should be the end of the bull run?

Carl, thanks again for your George Lindsay post. Always a great read and as usual sent me straight back to look at my ten year charts.

As I have posted before I can not but see a clear decade long Three Peaks and Domed House almost fully formed so that we are now on the dome around point 23.

I had thought it was coming down last month, but ten years is a long time and perhaps a dome takes longer to form, so I have been looking again and see your normal George Lindsay time span Three Peaks and Dome playing out so that points 15 to 26 may come to sketch the points 22 to 24 of a ten year pattern.

Yup, I know that I am breaking Mr Lindsay's timing, but if a pattern has any significance it should reflect something more elemental (like fibs) and apply on many time scales.

Anyway, thanks again and keep on blogging.

huw
and carl
nice to see somebody else out there who sees the 10 year pattern
and carl i think your minor
3 peakes domed house is interesting right now . yet id like to see 19 peak any time right now with a mild break back down
200 to 300 points on the dow .
the concern i have though is if we are bottoming now or even if we see point 20 by mid july ( july 13-27th ) then we are looking at feb march 2008 high .and huw on a monthly 10 year pattern this can be point 23 yet it is also possible it is point 21 and the decline when it comes ( early 2008
to mid 2008 ) can still be point 22
this would bring point 23 somewhere 2009 to mid 2010 .
things are getting interesting
joe