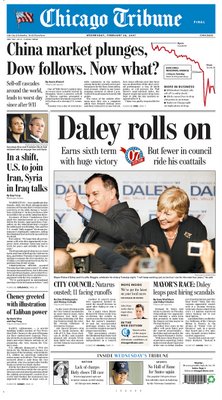 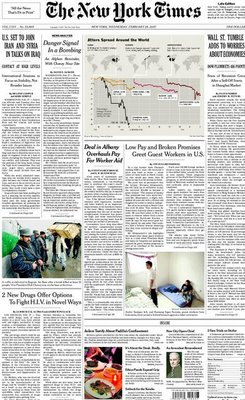 Here is an image of today's front page in the New York Times. The headline reads "Slide on Wall St. Adds to Worries About Economy."

But the most interesting development occured last night on NBC's Tonight Show with Jay Leno. Leno opened his comedy monologue by observing that if you had money in the stock market, you didn't anymore because "the market dropped 500 points today".

Now I have found the New York Times and the Chicago Tribune to be reliable fades, especially when they highlight bearish news. But the most reliable fade of all is Jay Leno. During the summer of 2002, the greatest buying opportunity of the past 10 years, Leno made jokes about the stock market almost every night, all along the lines of how much money investors were losing.

Remember that the mainstream media are in the business of telling people what they want to hear. They are at the same time opinion leaders and opinion formers. With this in mind I think it is safe to conclude that the drop from last week's high is NOT the start of even a 15-20% decline. Instead I think that most of the drop has already been seen and that the US stock market will make new bull market highs in the weeks ahead.
Posted by Carl Futia at 9:46 AM

20 week cycle is right translating which is very bullish.

Carl, the Chicago Tribune front page is at

but didn't these same bearish news come during september 11 2001, and market continued its bearish trend till the next year july-aug 2002 ?

Watching CNBC everybody is saying buy the dip, or a worst, wait a few days and then buy the dip. It also seems they are blaming the sell off on a glitch in the system, but it would seem the the selloff only delayed the reporting of how bad it was. Even my mother-in-law who is retired and visiting me this week commented that it will come back. It was no big deal to her...

You will never see a headline in the paper after a big selloff saying not to worry. And if you read the article, it does not scare people. It talks about sell programs (read fake causes) and china (which could be back up to it highs in a couple of weeks according to the article.) as the reasons for the move. There are no interviews with the bears or a bull turned bearish calling for more downside. The most bearish comment in the article is that if the rout cotinues it will be a challenge for Bernanke.

I think the article speak to complacency more than bullishness or bearishness. And my question to you would be, what king of head line after a day like yesterday would you consider Bearish?

The 250 point drop in under two minutes has still not been explained. I would say that market is anything but "stable"right now.

MSNBC.com has a BIG headline Has a market meltdown begun? -- and a small headline, Markets head for a comeback.

I think that says it all.

check out front page of

That's interesting if it were reality. Your evidence is anecdotal. What do you think the newspapers said after the first bad day in 1929? Would you like some quotes? Maybe the market will correct from here. Maybe this is the start of the bear. Maybe it isn't. But one day newspaper fades are not reliable. And, it's easy to state that they are a reliable fade but you cannot back test it or prove it because you are choosing what is newsworthy of a fade based on your bias.

Best cover story I remember recently was a 2002 or 2003 Money Magazine Panic edition which said something like "Time to Liquidate Your 401(K) into Cash?!!??!?"

Came out EXACTLY at the bear market lows.

Sounds like you are trying to data-fit your bias here. Were newspapers supposed to ignore a 500-pt drop on the Dow or bury it in the classifieds? Of course not. It was NEWS.

The classic example of "magazine cover" contrary capitulation was the infamous Business Week "Equities are Dead" cover from 1979. That occurred five years AFTER the nominal bottom. And the stock market didn't actually take off for another three years.

I don't know what the market will do from here. And neither do you. We can both guesstimate. But citing the fact that the NY Times featured the biggest, one-day selloff in six years on its front page is hardly the stuff of contrarian wet dreams or a sign that "the bottom is in."

leewhee,
"Sounds like you are trying to data-fit your bias here"

Gee, Carl, labeling anyone as a "reliable fade" without owning up to the fact that support level after support level of yours being breached while you continuously called for new highs for the past week seems to be "bad form" as the Brits say.

You have done a GREAT service by introducing many of us to the Domed House; but others who have commented here recently have had a better interpretation of it while you, as recently as last Friday 2/23, said "So far I see no reason to regard the top in the Dow a couple of days ago as point 21".

And to be fair AND balanced, in early February i went from 95% in stocks to ZERO stocks thanks to the Domed House concept that you introduced me to.

And i agree with leewhee: "Were newspapers supposed to ignore a 500-pt drop on the Dow or bury it in the classifieds? Of course not. It was NEWS."