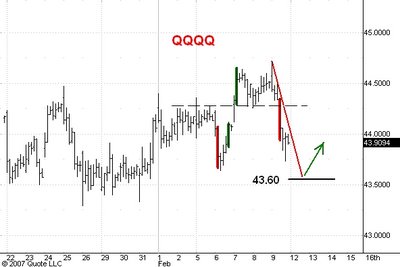 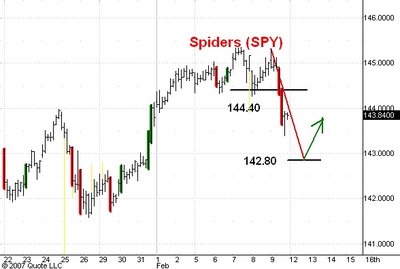 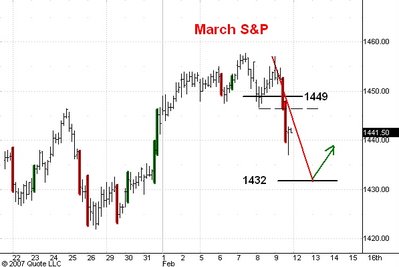 Here are hourly charts of the March S&P futures, the Spiders and the QQQQ's. I last commented on these markets here.

Contrary to my expectation the market broke badly this afternoon. You can see that the Spiders and S&P's as well as the Q's broke the support I had been watching. Moreover, this break was accompanied by wide range, down bars (and high volume). This indicates aggressive selling by long time frame traders. This action is especially significant because in the S&P's and Spiders it represents a breakout from a narrow, well defined trading range which had developed previously this week.

The minimum downside expectation now is illustrated on the charts. Since I am still bullish I expect the market to continue putting in higher lows and higher highs. The last break in the S&P's was about 25 points and a break of the same size now would end around 1432 (142.80 in the Spiders). I think the 43.60 level will hold in the Q's because they are acting better than the S&P and I expect this overperformance to continue.

If the market proves weaker than I think then the next downside target would be determined by a 33 point break from 1458 in the S&P's, a break equal in length to the December-January drop. This would drop the futures to 1425 or so and the Spiders to 1420.10.

I believe this is a normal reaction in a continuing uptrend and expect new bull market highs in a couple of weeks.
Posted by Carl Futia at 3:36 PM

Can you share with us how you view the Naz as outperforming? Over the last month the SPX is leading in performance and today the NDX led the market lower in percentages as well.

Would you sing a different tune if QQQQ aggressively breaks its $43.60 support on Mon?

I hear people talking about bearishness I do think they are wrong and we will hit bottom soon and rip to the upside. Nothing has changed and this is just small correction happening at fast pace.