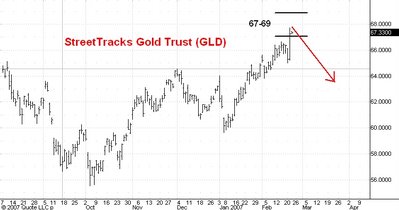 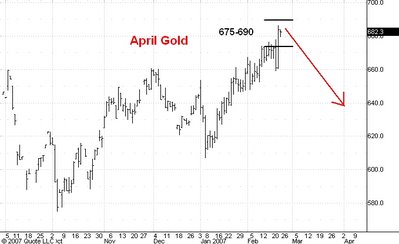 Here are daily charts of the gold ETF and of April gold futures. I last commented on this market here.

I think the gold market has reached a decisive juncture. If fact, I believe that yesterday's wide range up day was climactic in nature and that an extended drop is about to start. Here is why.

First, I think gold traders are overwhelming short term bullish. Secondly, gold has reached the upper part of the 550-730 trading range of the past 9 months. Third, the move up from the low of this range reached new highs yesterday and has so far lasted 8 months. Fourth, the market has entered the resistance zones I have been watching for the past few weeks.

It is this context which makes me think that yesterday's very sharp rally indicates the imminent end of the upmove instead of the start of a breakout to new bull market highs for gold. I think we shall see GLD trade below 60 over the next couple of months and eventually move much lower than that. The corresponding level for the futures is 600.
Posted by Carl Futia at 9:19 AM

SPX is completing 3 'pushes' which is a bearish Wolfe Wave

I enjoy reading your blog on a daily basis. In regards to your Gold prediction. Considering the fact there is a flight from the US dollar and given the current geopolitical turmoil it is my belief that we will see 695 to 700 POG within a week or so, and 800 by the end of this year if not higher. Technically speaking Gold futures broke through major resistance yesterday at 682. The line you drew at around 650 will become support for the near term until 695 is surpassed, which is extremely likely to happen. I can see nothing that indicates a gold price below 600 in 2 months time.

Mr. Futia, I've been trying to find an explanation for your use of the term "bear market" in the context of gold and silver. Could you provide what criteria that you use to define bear markets versus bull markets?
Thanks in advance for your efforts.