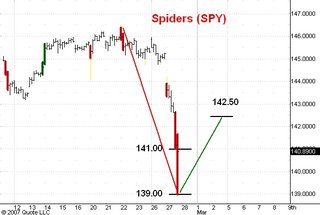 Here is an hourly chart of the Spiders. The S&P futures look pretty much the same. I commented on these markets a short while ago.

Instead of rallying from 141 the Spiders broke all the way down to my 139 target for the entire correction. Today's selling I think is climactic rather than the start of a much bigger drop. It seems an awful lot of people were trying to squeeze out the door before it slammed shut on the remaining bulls.

So I think that the next development will be a rally to the 142.50 level. Following that rally I think we shall see another break to 1390 or a bit lower, but that should be it. Once the smoke clears I shall be looking for a move to new bull market highs.
Posted by Carl Futia at 3:19 PM

same question as past few days
what if dow breaks below the point
20 low ????? what does that imply ?
the rest is apearant .

I agree Carl this looks like a washout ending pattern, not beginning of new trend.

May see this thing turn on a dime and get an end of month rally tomorrow.

We shall see in about 1-3 weeks if meaningful support returns.