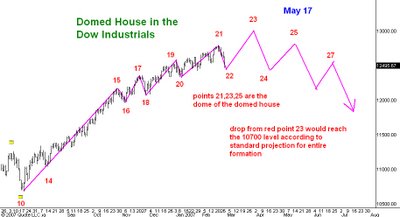 Here is a daily chart of the Dow Industrial average going back to last summer's low point. On it I have numbered what I think are the turning points in a developing Domed House formation which is part of George Lindsay's Three Peaks and a Domed House pattern. I last commented on this subject here.

The break in the Dow over the past few days is in my opinion big enough to identify the last high as point 21 of the Domed House. Point 22 is probably developing right now and should be followed by a rally to the 13000 level in the Dow at which point I think point 23 will form. Right now I shall stick with my guess that this high will develop in late March, but there is still an even chance that point 23 will be delayed until April or May.
Posted by Carl Futia at 11:57 AM

what if point 20 low is broken
is that important support ???

Carl, You have a pretty good following here, and like me, perhaps many of them have an imperfect understanding of your system. Since you keep adjusting your support levels downward--violating what numbers would constitute a true reversal. Thank for any light you can shed on this. --Bob

Maybe this is premature, but ... how much more room do we have to run before you relable Point #22 to Point #24, and correspondingly have to count the 7 months + 10 days from Point #10 rather than Point #14?

If she breaks point 20 significantly, what would that do to the count?