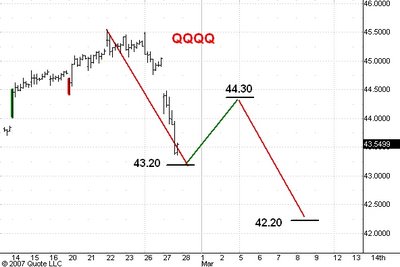 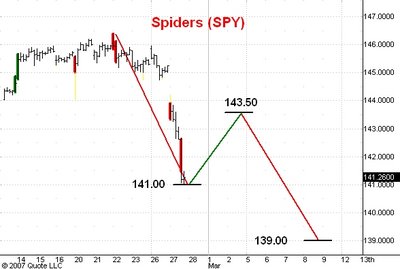 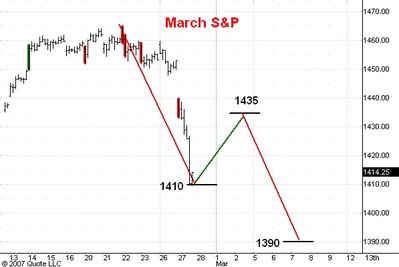 Here are hourly charts of the March S&P futures, the Spiders, and the QQQQ's. I last commented on these markets this morning.

The drop from last Thursday's high has been much bigger than I expected. In fact, it is the biggest break since the drop last July which tested the June low in the S&P. Frankly, I doubt that the bull market has ended. Today's bearish advertising is a bit too obvious and has the feel of the crowd bailing out at once.

Nonetheless, corrective waves generally have three distinct phases, so I do not think that the drop is complete. Instead I expect the S&Ps to rally 25 points or so from support at 1410 and then to drop to 1390 before resuming their bull market advance. Divide these numbers by 10 to get the corresponding levels for the spiders. I think the Q's will hold support near 43.20, rally a point or so to 44.30 and then drop to a final low near 42.20.
Posted by Carl Futia at 2:38 PM

Is it of no signifcance to your view of eventual higher highs that point 22 of the domed house is now significantly lower than point 20? Wouln't that be more typical of point 26 in relation to point 24?