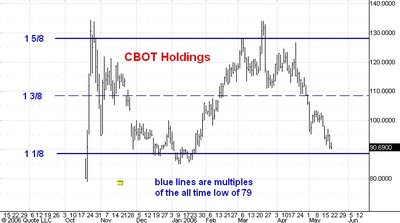 Here is a daily chart of Chicago Board of Trade Holdings. I last commented on BOT here.

I have been generally bullish on BOT and did not expect the recent drop from the second top above the 130 level to go as far as it did. I do think that the market is now very near its low. Not only is is rapidly approaching its last important low of 85.05 (which I don't think will be broken) but it is even closer to strong support at 88, the 1 and 1/8 multiple of its all time low of 79.

Before the bull market in the averages is over I think BOT will reach the 150 level.
Posted by Carl Futia at 10:58 AM