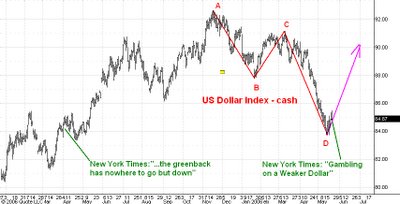 Here is a daily bar chart of the US Dollar index.

In this previous post which discussed this same chart I projected that the third phase of a three phase correction in the dollar index would end near 87.00. In the event the dollar developed more weakness than expected. However, I do think that its recent low at 83.73 will hold and that the index will now head for the 99 level.

Among the reasons I am bullish on the dollar here is that the New York Times is bearish. Saturday the NYT's lead editorial was headed "Gambling on a Weaker Dollar". In it the Times expresses the view that dollar weakness is appropriate and should continue. They say that the weakening dollar won't hurt the economy as long as fiscal deficits are reduced. To achieve this they recommend raising taxes!!!! Yikes!! Only the NYT believes that the way to stimulate economic growth is to raise taxes.

In any case, the last time the NYT editorialized about the dollar was April 2, 2005. I discussed that editorial in this post. I think the NYT is an exquisitely bad market timer. So again I will fade the Times and say that the dollar will hit 100 before it drops below 80.
Posted by Carl Futia at 10:28 AM