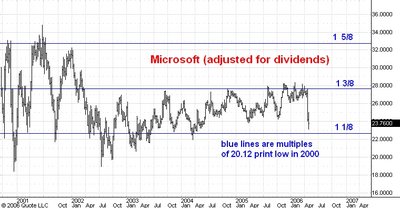 Here is a weekly chart of Microsoft which has been adjusted for dividend payouts. The low trade price for MSFT during the past 6 years was 20.12 in late 2000.

I have been bullish on MSFT largely because a bull market is underway. The stock has not performed well. Over the past couple of weeks it has dropped sharply as pessimism about the company's ability to grow its earnings has increased and a number of analyst downgrades were published.

What attracts my attention in this chart is that the low in MSFT was made back in 2000 and held even as the averages dropped substantially during 2001 and 2002. Morevover, MSFT has been trading sideways in a narrow range for the last four years. I think this is preparation for a big move up and the fact that MSFT is a stock people love to hate reinforces this conviction.