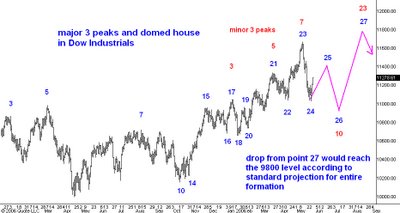 I last disussed the evolution of one of George Lindsay's Three Peaks and a Domed House formations in the S&P 500 in this post. I thought you might like to see the corresponding formation in the Dow Industrials.

I have labeled the chart above with blue numbers showing the points of the formation which correspond to the template you can see here. This is what Lindsay would call a major formation because the time from the first peak labeled 3 and the third peak labeled 7 is between 6 to 9 months.

This major formation in the Dow is in some ways more symmetrical than the one in the S&P 500. In particular, the dome of the domed house which comprises points 21, 23, and 25 has a very square shape ( a small "head and shoulders") unlike the lopsided, downward sloping shape of the dome in the S&P 500.

Note that like the S&P 500 the recent action in the Dow also has traced out a minor three peaks which I have labeled with red numerals 3, 5, and 7. This is evidence that once the current reaction ends at blue point 26 and red point 10 there will be a rally to new highs for the bull market. This rally will end at blue point 27 and red point 23.

Lindsay observed that the drop following the completion of the domed house in a major formation typically carries the market to the level at which the entire formation started. In my view this is the 9800 level of the October 2004 low in the Dow.
Posted by Carl Futia at 10:04 AM