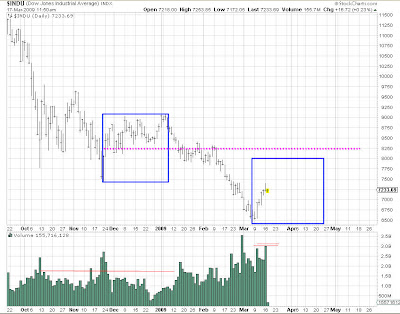 Here is a daily chart of the Dow Industrial average covering the past six months. From its November low near 7500 the average rallied about 1500 points. A similar rally from its March 6 low near 6500 would carry it to 8000 (blue rectangles). The midpoint of the November-January rally was roughly the 8200 level. This will also be a resistance level on the way up. So I expect the current rally in the Dow to carry into the 8000-8250 zone.

Notice also that the volume on the rally from the March 6 low is definitely higher than was seen on the rallies from the October and November lows. This tells me that the drop from yesterday's high is only a reaction in an ongoing uptrend and that there is more strength to come.
Posted by Carl Futia at 11:54 AM

have you been stopped out yet? or are you still confident a minor correction is on its way

I love the moronic doubters...both the bulls and the bears. The forecasting and strategy seem pretty obvious.