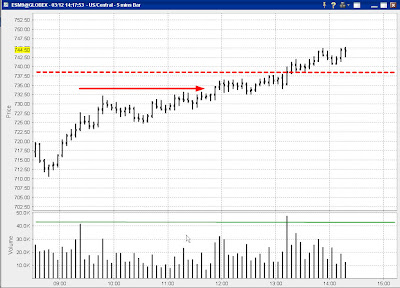 I took the title for this post from a fellow named Fredric Bastiat. He wrote a beautiful introduction to economic thinking with the same title in 1850.

Today's e-mini action is a case in point. Twice today I thought the market was likely to react 12-14 points. But nothing happened. Instead it continued on its merry way upward. This was especially surprising to me. The market was close to matching its biggest rally of the past two months (red arrow) and was challenging resistance which stood at the level of the November 21 low at 739 (dashed red line). Either fact would normally produce a visible reaction, but neither did.

The other unseen phenomenon for today is the absence of high volume on the persistent, all day rally. Volume has at best been moderate today. This is unusual for an up day like this and many would interpret it as a bearish indication. But I don't.

I think the moderate volume and the lack of any significant reaction today tell us that there are not many sellers here, even though the market has encountered what should be resistance. This tells me that the market is "sold out". It is a very positive sign and more evidence that the e-minis are on the way to 840 during the coming weeks.
Posted by Carl Futia at 3:19 PM

As you said,
Sellers are nowhere to be seen.

Maybe those levels were too obvious...and the need of a rally was too high( last week i bought stocks for the first time in months).
Still i tried to sell and lost, i felt a bit lonely with my short.

You could be right about the volume, though i am still betting on a downday tomorrow.

Hi Carl,
It is very nice to be able to go through your rationale of where the market is going and then to see you actually execute your plan. I,for one, appreciate it. Also, if you are interested in economic theory, I suggest you read Human Action by Ludwig von Mises. It will only take about a year, but it is so clear and lucid and explains the nature of economic influences on every facet of our lives.

Thank you for your blog.