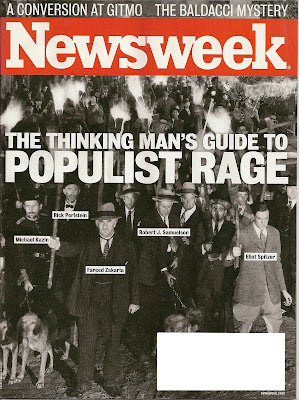 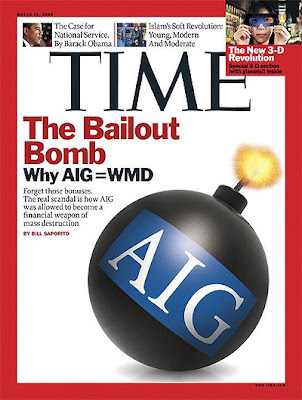 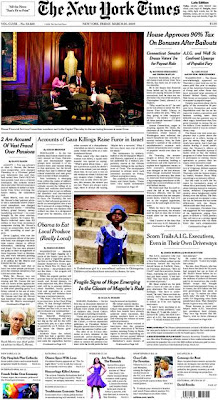 I do a lot of reading and web-browsing to try to get a sense of the spirit of the times. I believe that despair has engulfed the elite opinion makers and leaders in the USA. The latest product of the House of Representative, the 90% tax on bonuses, is a clear symptom of the now mindless response that people have to developing events in the financial crisis.

The latest cover of Time magazine is also interesting from this perspective. It depicts a bomb labeled AIG with a burning fuse, described by the caption as a weapon of mass destruction. The fact that the fuse is burning conveys a sense of potential disaster ahead.

Paul Montgomery's magazine cover indicator would rate this cover as a buy signal for AIG stock which would become actionable about a month from now. If AIG is a buy then the financial crisis is just about over. This squares with my belief that sentiment is so bearish now that even a return to just modestly bearish sentiment levels would push the S&P over the 1000 level.

Added later: I just appended this week's Newsweek cover to this post. It makes my point exactly.
Posted by Carl Futia at 12:45 PM

hey Carl. Thanks for your insight. I too like to gauge the outside and inside temperatures and I am in the same camp as you. A rally with gusto, uncertainty with the stamina of the legs. I still have some thoughts that a bottom may have been tested, but not likely the bottom just quite yet. But my learning has also said this is truly a game, and the game can often change. I love your posts and thoughts. I gain clarity with your thinking (even when my own differs).

One may as well notice the deep silence on earnings? or
will it be a a missing magasine

Yes--This is only a game. By the way aig has absorbed more than 170B$.That is not a joke or a small thingee.It will never be a buy. Dont get carried away by this rally ..I expect the next reaction to be very violent to the downside, whenever that happens. We will see 650 again

Part I: Geithner's Plan "Extremely Dangerous," Economist Galbraith Says
this is thru yahoo finance and i totally agree..This might not pass thru congress