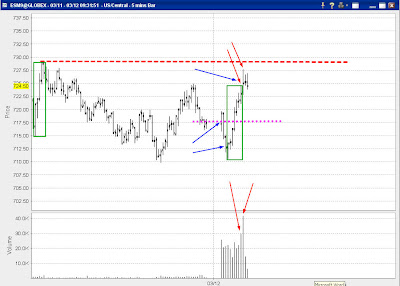 Here is a 5 minute bar chart of the last two day sessions in the June e-mini contract. (Volume started moving from March to June this morning.)

Since the trend is up I bought near the open because indications were that the 708 overnight low ended the reaction from yesterday's high. The market dropped about 6 points from its open, still within bullish parameters, and I bought a second unit (lower two blue arrows). A rally started immediately and so far has carried the e-minis as high as 727.50. This rally was bigger than yesterday's early rally (green rectangles). Moreover, as the market approached yesterday's high (red dashed line) at 729 I saw two high volume bars (two pairs of red arrows). The question was whether or not this was climactic action or preparation for a breakout.

My thinking on this went as follows. Normally on a breakout move, the high volume develops after the breakout, not before. Moreover, this high volume was showing up near yesterday's high after a rally that was bigger than yesterday's early rally. This combination of facts led me to deduce that the sellers were taking temporary control of the market and that a reaction of 8-10 points would develop soon. So I sold my longs at the highest blue arrow.

Midpoint support is now at the purple dotted line around the 718 level. I plan to be a buyer again on a break of 10 points or so.
Posted by Carl Futia at 10:35 AM

Thank you for taking the time to make this blog so interesting and educational. I really appreciate what you are doing.