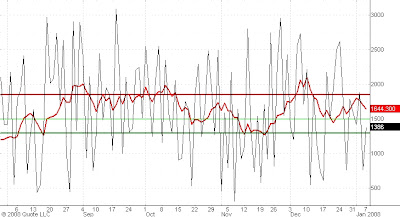 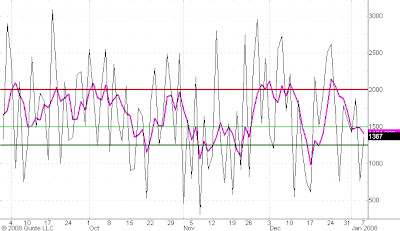 Here are two charts showing the daily count of the number of issues traded on the New York Stock Exchange (black line) and the 5 day (purple line) and the 10 day (red line) moving averages of this number. I last commented on this indicator here.

This morning the cash S&P 500 index took out its November 26 low at 1406 and I think it is likely to drop into the 1360-90 range before this decline ends. I want to bring your attention to the bullish divergences which are currently visible in the two charts above this post. Note that the 5 day moving average of the advancing issues count is still above the levels of its mid-November low as well as above the level of its mid-December low. The same is true of the 10 day moving average which shows an even more pronounced divergence.

Divergences such as these are not characteristic of a market in the midst of a massive bear market decline which has much further to go. Instead they suggest to me that the drop from the December 11 top is the last phase of a reaction in a bull market which has lasted 6 months so far and which I think is very close to its end. Just to jog memories recall that the 2004 bull market reaction lasted 5 months in the S&P and 8 months in the Dow Jones Industrial average.

Once the cash S&P reaches the 1360-90 zone I think we shall see the market put in an important low which will be followed by a move in the cash index above the 1600 level.
Posted by Carl Futia at 11:10 AM

absolutely positively agree with your bullish view.Buy on weak days 2 day RSI shows a ST bottom for today at least.

The problem here is that carl has been bullish for months on end... months. For months I have read about the S&P hitting a new high, if the market isnt doing what people are expecting that should say something....

The Delta Phenomenon is saying a key low is due today/tonight.

I like Carl's assessment. Once we hit 1360, we will see pops really fast and the herd will wonder how they missed the boat. Regardless, the scenerio needs to play out first and then you can burn or praise Carl. Keep up the good analysis.