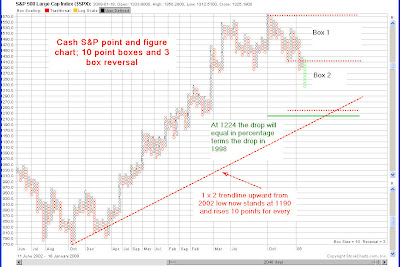 Here is a long term point and figure chart of the cash S&P 500. All the markets are closed today in the USA but the e-minis did trade on globex this morning until 11:30 am New York time. They will reopen this evening. In Europe massive amounts of selling came into the market and drove the e-minis down to 1256 from their 1325 close on Friday. This brings the drop over the past 6 trading days to about 12%. This kind of decline certainly qualifies as a crash.

Where will it end and what are the prospects for the next 6 months?

In any market situation the first thing to do in developing a prognosis is to look for historical analogies. I think the best analogy for the current situation is the July-October drop in 1998 which carried the cash S&P down from 1188 to 923, a drop of about 22.3%.

I have three basic reasons for liking this analogy.

Secondly, the 1998 drop occurred against the backdrop of great financial uncertainty: the Russian bond default and the Long Term Capital Management meltdown. Today we have the worldwide subprime meltdown, fears of a credit crunch, and fears of a recession.

Finally, 1998 occurred as the "interim crash" segment in James Alphiers phase theory
These segments are generally very fast but relatively brief declines which are part of a world wide panic over some unexpected event. The market's behavior over the past three months fits this description exactly.

If the 1998 analogy is correct, then a drop to the 1224 level in the cash S&P would be the expectation for this decline. On the chart you see above I have pointed out two other indications of support near that general level. The bottom of the second 170 point box down from the 1576 high stands at 1236. The 2 x 1 trendline rising from the 770 in 2002 now stands at 1190 and rises at the rate of 10 points every two columns.

These factors make it likely that the drop from the October 11 top at 1576 is nearly over. A typical sequence would be a quick rally of 100-130 points from this morning's low, followed by a drop which will end somewhere in the 1200-1260 zone. After that final leg down I shall be looking for a new bull market to begin. If the 1998 analogy holds, it will take only a few months to move above the 1576 high. On the other hand, the move up from the 1998 low lasted only 17 months. A similar rally from the upcoming lows would produce a market top in 2009, just about the time we would be looking for the end of the Alphier phase and the top of the 4 year cycle.
Posted by Carl Futia at 10:58 AM

Carl, 2 month ago I told you to stay away from stocks, today you follow up with the all so well known C- word. TIMING is everything.

... you make forecasts going out 6 months without looking at the fundamentals?

I agree with you that this decline fits the description of a crash more closely than the beginning of a new bear market. (The one fly in the ointment is the 1929 crash which did signal a very long and very deep bear market.)

As fast as the market's been moving these past few days, it's going to be challenging to pick a bottom. I wish you the best in that endeavor!

Your "I told you so" is most unbecoming. People have been telling me to stay away from stocks for more than 5 years. Why do you deserve more credibility than they?

Have you read any of Paul Desmonds work on 90% up & down days? It's worth the $10 to get the pdfs (google it and you can probably find it for free or get them at lowryreports.com).

Anyway - they've been bearish since for the past few months.

I'm in cash and waiting for some real confirmation that we have a bottom.

Everyone is angry, and I doubt anyone has all their money positioned short unless all their money is an insignificant amount to begin with. I always laugh at the "end of the world" group, or the "America will collapse and fail" crowd. Most have them have been calling for a collapse or crash since the first major rally out of the oct 02 - march 03 bottom, and they were the smart ones who called a major top with every move higher for 4 straight years. If you go through life thinking death is imminent, you'll always be right in the end, but that last one doesn't count

I am long and expecting a bottom, but this chart does put some second thoughts in my mind..

I read Carl's blog daily because I value rigorous thinking, even and especially if it disagrees with my own.

I trade on the basis of moneyflow and relative strength, and I've noticed Carl's methodology has been really good at calling key reversals. Anyone reading the blog last August could only marvel at his spot on bottom call at 1374.

Thx Carl for sharing your thoughts and experience.

I'm not arguing with you Carl, just trying to understand and follow your thinking.

Final point/question, what price action or price level would you invalidate the bounce you expect and cause you to immediately go short.

Thanks for sharing your insights.

What price action or price level would invalidate the bounce you expect and cause you to immediately go short.

Lindsay also observed that counting forward an average of 15 years and 6 months from a bear market low often comes very close in time to a bull market top.

Being a Gann fan I have always believed "7" is the death year and marks sharp corrections, but I tend to agree that the ultimate top is 2009. 2009 marks many significant Gann cycle completions and jibes nicely with George Lindsay's idea posted on Carl's blog in 2003.

Looking at the ES trading at 1263 as I type it's challenging to think of this as a 1998 type reaction but that may be what's happening.

The 1998 possibility is an interesting one though I'd say that our current economic maladies dwarf those of 1998. I enjoy reading Carl's work quite a bit and I'd recommend bashers to go elsewhere. Carl, my two cents - the Russell 2000's behavior in early summer 2007 was an early tell and a profitable one. Keep up the great work. Thanks for the Darvas' boxes.

ah, "new bull market", in my opinion, will be a bit of a stretch. I think there are lots more ugly shoes to drop.

Less than 50% off the top might be viewed as a gift. YMMV

Anon 11:45: I also said the Cycle low is January 20 and the bullish cycles wont start until after January 20