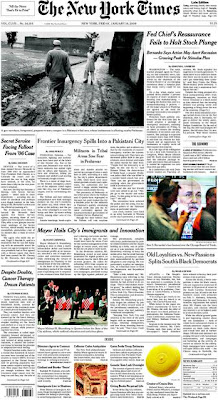 Here is an image of this morning's New York Times. It tells us that Bernanke's reassurances failed to halt the "stock plunge". A little later in the story we learn that the decline so far in 2008 has been a "stomach churning" 9%. Then we discover that "investors on Wall Street remained in a black mood as data showed that the housing debacle was getting worse and beginning to bring down the rest of the economy".

The more emotion-ladened words there are in a news story or headline the more likely it is that the story reflects a solid consensus of opinion. In this case I think this Times headline is telling us that stocks are scraping bottom and that a sustained advance is about to start.
Posted by Carl Futia at 9:26 AM

While i really like most of Carl's comments the Dollar and Gold comments make no sense. He is bullish Gold and bearish the Dollar. The chance of that taking hold is less than 1 %. If the dollar rallies gold will sink, guarnteed.

Carl, I wonder what you feel personally the purpose of this blog is ? Clearly you have demonstrated that forecasting and real time trading are two different things. Unfortunately I have to lecture you not to forget that we are in this to make money and not to be right.

I do not want to speak for Carl, but my interpretation of his work is, he is looking for a top in gold here, to be followed by a substantial decline.

Believe me I am grateful for your lectures and for your efforts to enlighten me.

I have been trading with real money since 1970. Amazingly, despite having lost a gajillion dollars over the years, I am still in business !!!

I write this blog so that I may have the opportunity to learn from those with superior skills and knowledge such as yourself.

Thanks for your contribution.

Carl,
You sardonic guy you!

Please say you weren't stopped out a tick from today's low. The panic selling has spun out of control and you seem to be about the only technical analyst out there who doesn't believe we are entering some raging bear market i.e. difficult for me to believe the majority will be proved correct.

Carl if you got stopped out today, I think your stop was a bit off. I think you should get back in. My analysis shows a rally into the April timeframe, consolidation for up to three months, and much larget move up into early-mid '09. Of course until we get the initial move up, I can't project the following sequence with exact timeframes.

Are my eyes deceiving me or are all 4 moving averages of advancing issues (5,10,20,and 50) positively diverging from this price action?
I don't believe I've ever seen this before.

Carl you have been posting these so called contrary magazine and newsletter headlines since last year, and yet the market has been going lower since.

Carl if you have this blog to learn from the superior skills and other then why don't you join in the discussion and take an active role in th comment section from time to time? You only respond and make comments only after people speak negative of you and/or about your calls.

As far as I can determine, Mr. Woods has been bearish on this market since 2001. So the fact that he is currently bearish is of little significance.

Does the corollary also apply to your constant bullishness the last 6 months or so ?

I note that you don't hesitate to take time to reply sarcastically to your critics, but will not take the time to respond to others who ask you even the simplest, sincere questions.

Carl, the problem is if you actually would listen here and there to traders like myself your approach actually could work.
But it needs to be fine tuned.

Hold on, it is Bernanke is messing with most of us.

It must be that Ben fell in love with the diamond which I drew weeks ago.

Carl is certainly right about the New York Times. Go to Carl's "Index of Contrary Opinion Posts" and look at the dates of all NYT postings regarding bear markets, crashes, turmoil, etc. Without fail, these have occured at interim market bottoms for the last few years. Don't take my word for it, chart it!

"I note that you don't hesitate to take time to reply sarcastically to your critics, but will not take the time to respond to others who ask you even the simplest, sincere questions."

I'm sorry, but I am a busy person and write this blog because I enjoy telling people of my market views and occasionally explaining how I come up with them. But I don't care to engage in discussions, even with the most sincere reader, because my time and energy are committed to other projects.

As for my sarcastic replies to some of my critics, let me say this.

I am happy to entertain reasoned criticism of my views and publish market predictions that disagree with my own. Disagreements are what make markets possible.

But I will not tolerate ridicule or ad hominem attacks on me or on commenters to this blog. The sort of comment that I regard as a legitimate target for my rapier-like wit comes from the anonymous commenter who says or implies that he can do better and "saw it all coming". My response to this sort of comment is simple: prove it!

This is my blog and I always get the last word.

Carl,
You do yourself an injustice. Your wit is truly more substantial than a rapier. It is more in the realm of a saber, or perhaps even an Excalibur.

After all, it takes a superb wit to reply to the nincompoops of the world after suffering an egregious loss.

Mars opposite Venus taking no prisoners!

Gann once said "The Inner Planets are the Key"

Right on Carlminator as in terminator go get'em :))

It seems like you are having a hell of time today?

I can totally empathize with you as I was bluntly attacked with name callings for 2.5+ years because I think that they were wrong, i.e. bears.

Just want you to know that I know exactly what you are talking about.

This graph tells it all.. that we are going far a long fall, and no contrarian indicators can save.. Although we may get short term bounce..

congrats on the 37-years of trading...must be doing something right....that alone is why i will continue reading....

tnx carl
great work
-I agree that next movement in stocks should be upward.
-but crude and gold tend to move together. lower crude=lower gold.
old mcclellan wrote that gold tends to peak @ fullmoon. we'll have one 21january.
must say I'm short gold.
twiggs writes about this connection gold-crude

Yes, the world is ending ... get out while you can ... yeah right!
Stocks are cheaper now than the Chinese goods we import!

What a time to be a buyer!

Carl, this blog is worth the read, please do not let the idiot commentators get to you. I'd like to see their own blogs!

What is your thought on TL break?


It was a big disappointment for bulls for sure, in fact, Mark Hulbert noted the top 10 best market timers were bullish, remember his comment. I had bull visits as shown below as an example. He was a long time poster who I knew during the last two years on CS, but maybe bulls will be back; but, LT TL supports are broken during the OE week.

Not everything is perfect, but you must listen to me..2008 estimated S&P earnings at $97.40 and market can certainly trade at reasonable 17 times. You must quit being bearish at the risk of losing your "good" market timing reputation. We just finished a 10+! correction...it is over. Stay bullish

During the OE week, market long term trendlines are broken as shown on the DOW weekly chart. SPX and Nasdaq LT TL are also broken; hence, we now can acknowledge that we are in bear market for a serious correction which started since the Oct 11, 2007 top.

This is not surprising as I noted that $Tran, $SOX and $BKX were leading the market, specifically on 12/12/07; and noted that I wasn't bullish during 2008. While fresh bulls were screaming that we are making new highs and screaming bears were wrong during the last few years, which I pointed out that he was going overboard, the bear markets have sneaked upon us during the OE week.

Nevertheless, all major brokerage firms have claimed that SPX will trade to 1500-1700 during 2008; so, let's see whether markets will regroup. They might restate their market forecast for 2008 which is irresponsible if they readjust too often; but, they could restate during mid year if market condition continues to deteriorate.

We need to hear good news.

Carl, I'm looking at the daily DJI chart and I see a completed 3 peaks and a domed house pattern. If Oct 11 was the high, then 7 months 6 days from March 5th, Point 10, would explain the duration. Also, after Friday, the close was almost exactly the same level as point 10 completing the formation. What do you think?

Carl, appreciate your insights and willingness to share your ideas. Creating something takes time, thought and innovation, tearing it down takes and afternoon and a wrecking crew. I believe your critics are disgruntled bears who have been waiting 5 years for a chance to get back all they lost over that time period. Real winning traders do not take it personally when someone else has a differing position - the game is never won or lost in a blog... (I personally think chips lead the way higher this time along with the US dollar) All the best

WOW! S&P e-minis came within one point of limit down today (Monday morning). Haven't seen that for a while.