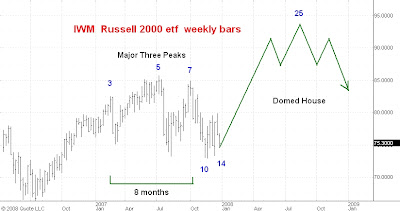 A couple of months ago I discussed what I thought were valid mini and minor examples of George Linday's three peaks and a domed house formation.

The depth of the October-November drop in my opinion invalidates both those formations. Moreover, while there are potential major formations shaping up in the Dow and the S&P, I don't yet have enough confidence in either to say more about that situation just yet.

However I think the weekly bar chart of the Russell 2000 ETF you see above this post is worth attention. There is a very clearly define, major three peaks visible which developed during the February-October 2007 time frame and the October-November drop is a clearly visible separating decline which I believe ended at point 10.

The low which I think will form this week or early next should then be point 14. In Linday's theory the normal expectation is for point 25 to develop about 7 months and 10 days after point 14. In this case the time measurement would predict a market top for mid-July, 2008.
Posted by Carl Futia at 9:33 AM

Although I could agree with this chart and speculation around it, I do believe that the third peak is forming now.
I have this feeling ;) that SP500 is heading downer to the 1375 level and then we will see the market going above the 1560 resistance level.
The market has not yet purged.

Although you believe that the depth of the October-November drops invalidates the 3PDH formation. I have to disagree. Although the timing may have been OFFFFF, I really think the formation occurred and peaked precisely on October 9, 2007. If you remember the original discussion you suggested the formation of a "mini" 3PDH. Unfortunately I was more concerned with the timeline that you implied instead of the actual formation. This also caused me to hold out for more gains and subsequently suffer a lashing as I hoped for more robust/parabolic moves. So Yes, I think you were RIGHT about the formation, but WRONG about the timeline. I think if you would have given more effort to examining the formation you would have noticed the divergance between the formation and what you expected as the "timeline." Had you more frequently discussed the formation, you and perhaps many of us who enjoy reading your commentary would have been able to clearly see the mini peak. Much respect to you, I have learned a very valuable lesson in technical analysis because of you. The tuition may have been pricey, but nevertheless, invaluable. I hope that you are not discouraged because you believe the formation never occurred, I think it did. It was just a very small formation, whose timing did not adhere to lindsay principle precisely. The next time - and I hope I speak for many of us who read your work - more follow up on a great idea. Thank You.

Interesting analysis. I am of the opinion that the under-performance of R2k in 2007 was a major source of grief for the stock indices. I also believe that any sustainable rally must be led by R2k. But it also makes sense to me that this market should rally (and strongly) in the face of the steady diet of bad news it receives.

On the SPX Monthly chart, there appears to be a Monster 3 peaks formation developing

Carl, are you seeing $SPX and $INDU as very similar to the '86-'87 consolidation of those indices? I am.

That timeline would fit with the top you've drawn for the $IWM.

I also see the $COMPX as being in the same point the $INDU was in in early 1936.

Is this the same interpretation as Bucky Fuller's ?

Do you still do your charts by hand or do take advantage of ephemeralization ?

i am not sure if you read Terry Laundry's blog but he thinks that we have started a bear market that could take the indices down as much as 35%.any thoughts? thanks

I have difficulty in seeing where your bullish predictions for 2008 are coming from.

Hi carl
do you ever look at inverse symmetry, where the second half of a wave is the inverse of the first half.
I am sure Lindsay knew of this.

You have been looking for the 3 peaks for the last few years and writing about it saying its almost here and here. It has come and you missed it and stopped writing as often as you use too. I would be upset letting the 3 peaks unfold right in front of myself and not recognizing it also.Are you going to finally give up on Lindsays writings? I know this is kinda of embarressing but don't give up.

I have posted before about the possible application of the 28 points to a longer cycle - its probably 12 in my view, which was a period GL was interested in although I don't think he sought to apply the three peaks and the domed house conept to such a period.

Point 24 on January 22 2008 and we it might appear possible that we have departed from 25 and started on the longer slide.

But of course one never can really tell.

Regards and all the best with the trading.

Carl, in the long 12 year pattern its still looking as if we are at point 25. Have to qualify that though as we seem to have been there for so long now I am wondering whether we might be at 22 and if the peak in the dome is yet to come. Hope not as I am still short! Anyway, isn't it about time for an update on your thoughts on this concept?