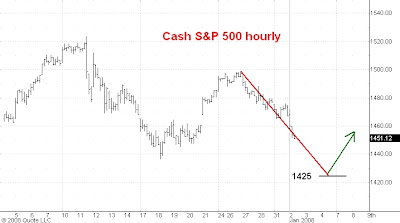 I was stopped out of my long position in the e-minis at 1461. I have been expecting the market to embark upon a sustained uptrend but instead we have had wide fluctuations within a trading range. The fact that we are seeing even more weakness today after a two day drop means that the 1498 high on December 27 ( at 1511 in the e-minis) was a genuine lower top and after lower tops develop one generally should expect lower lows.

So at this juncture I think the drop will carry the cash down to 1425 or so and the e-minis to 1435. A low at these levels would mark the end of a three stage drop from the December 11 top and should set the stage for a move up to new bull market highs.
Posted by Carl Futia at 11:40 AM

Wide stop...Way to turn a small profit into a large loss. Congrats

To the comedian who posted the comment above at 11:48 am:

If you expect me or anyone else to take your after-the-fact criticism seriously you will have to post warnings of impending stop- outs before they happen, not afterwards.

You are an expert at trading the past by looking in the rear view mirror. Sadly, as you well know from your personal experience, it is impossible to make any money that way.

the geometry of my work suggest we are very close a trading high basis USO... sells have already triggerd in PBR, OIH, XLE, XOMand longs triggered in DUG on monday.

At what point would you conceed
the bull market is over?

I never change my stop either, if the anonymous guy was smart enough to figure out Carl places his trades at points near support/resistance. if anonymous guy has any experience trading then he would know that when you trade at those levels prices often retest and briefly break though the price level you were targeting. if you moved your stop to break even you would take yourself out of many trades that you calculated (forecasted) correctly

1425 would make a nice ABCDE triangle beginning from the August low as wave A. If that plays out, then the next wave should be up to new highs.

Last year had some very impressive rallies (60-100 SPX points) out of that 85% lunar low area.

Lets see if the bulls can muster any strength after Friday

I wouldn't be in a rush to load up to go long. Yes we're going to get a rally but it won't be big. We have one more swing up and then another large swing down to get to a low. The question is will that low take out the Nov. low or not. My target date for low is Jan.16-23. Depending on what my proprietary indicators say, we either set off for new highs and 7-11 weeks of uptrend or we have another 12 - 15 weeks of bottoming to go.

The whole world sees that abcde potential triangle. Go anywhere and traders are talking about it. Too many on the same side of the trade.

I follow the Q's and noticed that as of today we pretty much filled the two up-gaps from the last recent low (around 49.50). Another reason to think we're moving up from here.

I also got stopped out of a ton of positions today but got back in at the lows or near and am 100% long . I think the a/d line was OK for a market down so much and now the Bears have the I told you so going like the Bulls did a few short days ago ..the real call will be Friday morning and the bottom line is the Bullls have more going for them now then the Bears do and the setup is even better now from an oversold area.

name is anonymous joe
i still think that the dow is in point 19 . possibly this is still pt 18 but my thinking is this .
monday jan 7th is a low of sort and the mkt then rallies into jan 21 . if this is point 18 then the dow should be in the b wave of an a b c move to the upside . wave a was 12 daily bars low to high
this b wave could be over as of today ( wednesday ) yet cyclically the low is due monday jan 7th .
12 bars including jan 7th targets
jan 21 ( options expiration )
if wave c equals a then the dow should hold near present levels
and head up just above 13963
just above 13963 is where point 19 should peak and then we go back down into point 20 . point 20 is due to bottom feb 6th .
there is a stronger then normal bearish cycle whic runs from
jan 21 to feb 6th .being that it is a stronger mini crash style cycle it should bring the dow down fairly hard and this would also fit the pattern of the narrowing triangle that as te guy above noted the entire world is now noticing and yet ive been pointing it out since june .
so even as point 19 finishes ( if im correct well know by jan 21 .
there should be another subdivision which should apear as another 5 touch point with in it
this would include waves 1 and 2
all told there should be 7 touch points and this entire process
will last into early april .
bottom line we should be about to embark a strong rally which needs to poke above 13963 to give point 19 completion . a further sideways trend should continue into early march . and the uptrend should be persistant from early april .

sometimes it requires a few more days for market to follow ;)

I'll keep it real simple. Buy spyders under 1450. It's a gift horse but many are too blind to see it. Nor can I make you drink the water.