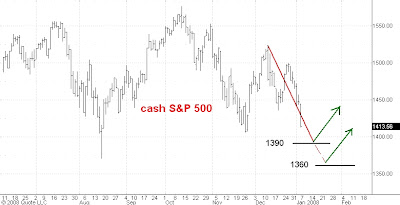 Today's action is, at least in the short run, bearish. I had expected the market to dip briefly to 1435 or so in the e-minis but then rally strong by today's close well above the December 18 low at 1446. Instead, we have seen a wide range down day on the breakout below 1446. This tells me that the cash S&P should continue down to 1390 or so which would put the e-minis near 1400. A drop to 1390 would make the drop from the October top about as long as the drop from the July top to the August low.

There is an outside chance that we will see a bigger drop to 1360 in the cash S&P ( 1370 in the e-minis) which would be a temporary break below the August low at 1370 cash. However I think any such break down will prove to be temporary.

Despite all the bearish action and sentiment we have seen over the past few months I am still convinced that the market will rally to new bull market highs by the end of the first quarter of 2008.
Posted by Carl Futia at 2:54 PM

wow. that's a pretty bold prediction for Q1 2008, carl. what do you think the catalyst will be, given today's employment report and the upcoming retail sales numbers that are expected to be bad? thanks.

Based on past history, we can only assume that you'll be the lucky recipient of more than a few abusive posts today. Hang in there. As you have noted, the abusive posts tend to peak at or near the bottom.

I'm wondering whether you've done any work on trying to time a market bottom using time instead of support levels (or using both). And if so, why did you abandon that approach in favor of using support levels alone?

I do agree we are due for a bounce, but I for see lower highs and lower lows ahead

That abcde triangle is looking busted. I expect a rally next week and another great short to come out of it. Like I said before-too many traders saw this triangle. My cycle analysis says Jan. 16-23 for low. But I tell ya, going under Nov. low means going lower than last QTR, so a rally to new highs by feb.3 like some are saying is a pipe dream. bears better run? now? If that's what one's anaysis is telling them, they should re-anaysis just like the Hurst guys looking for a 20 week low right here. Better methods than hurst bias out there. IMO.

Tough market. Thanks for putting your thoughts out there for the world to see.

I'm usually balanced long vs short but right now I'm long and wrong for a year-end play ... wonder if others in the same boat are part of the reason for the weakness.

Carl is one of the few who will change his outlook based on what the market gives him unlike some who glue their bias based on their strict interpretation of a flawed methodology like the hurst and astro guys.

The final leg of a triangle will often overshoot the trendline connecting the first and third down legs. Furthermore, on the short term chart, I see an ending diagonal occuring, which indicates the decline is running out of steam. I think the triangle scenario is still possible.

imho 1880 ndx100 index is coming before the bull has back.
BTW the hipotethic doomed house in russell is still alive?

Carl, I don't see the same bearish sentiment you seem to hear. Yes people say things are bad. But I don't know or hear of anyone who does not expect a near term low in equities. Everyone is positive on equites. Even the Investors Intelligence survey is surprisingly bullish January 2nd survey
bullish 52.2
bearish 24.5

Everyone expects an aggressive easing Federal Reserve, which they will certainly get. But with everyone banking on the easing to bail them out, I would be cautious. I would use the Fed panick as an oppertunity to sell.
Also the 30 treasury did not rally today along with the shorter term debt. Maybe these aggressive fed cuts coming will do more harm then good?

I am extremely bullish for next week

I still respectfully disagree with you on a new high.

for your insight over the last couple of years. While I have not and still do not agree with you on a lot of things your insight has helped me a lot. I do not expect you me or anyone else to be right all the time. but your insight has been vry helpful to me.

I am absolutely convinced that elliot wave OR "unbiased" elliot wave as some like to claim is fraught with many flaws and has inferrior predictive ability. elliot wave is too fragmented a system to work effectively.