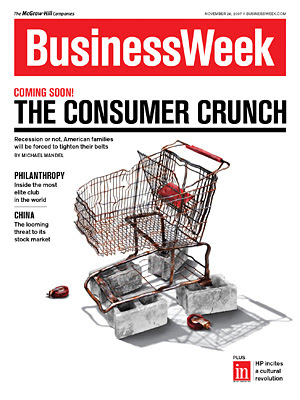 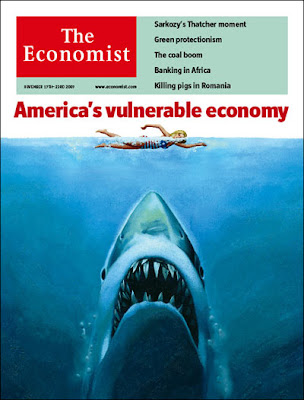 Here are images of the latest covers of The Economist and Business Week. As you can see both cover stories are about what is presumed by many to be an imminent slide of the US economy into a recession. The usual explanations for this prediction are the credit "crunch" brought about by the sub-prime lending mess coupled with the high price of oil and a dollar that I am constantly being told has nowhere to go but down.

Well, maybe so. But I should point out that this would be the first time in my memory that a recession was announced by cover stories in major magazines before it even started. In fact, I keep reading the major media in search of any positive story about the US economy and I can't find any.

This is a very unusual state of affairs with the major market averages just 6 weeks after and about 10% off their bull market peaks. Generally speaking, the media and the investing public remain quite bullish during the initial leg of a bear market, turning bearish only much later on subsequent drops to new lows.

I think that these covers and the associated bad economic news being highlighted by the media will prove to be false alarms. I think the stock market averages are near or at their lows. I think the bond market is at a temporary high and will drop once economic strength becomes recognized. Finally, I think the US dollar is making a multi-year low near the 75 level in the dollar index and that a dollar bull market is about to start.
Posted by Carl Futia at 11:16 AM

Well, the Economist cover on the dollar about a year ago was right on. Not sure this "indicator" is empirically valid.

On the other hand, both magazines have been preaching the death of the consumer for several years now (as the Business week article actually admits), both without any luck. Seems to me that we can't give them any credit for being right on the dollar since they've been firing with both barrels in the dark - they're bound to hit something! Even a stoped clock is right...

You posted a similar "bearish magazines" theme about 2 weeks ago and ES was >1500 then. In the long-term you are probably right, bearish sentiment leads to new highs. In the short-term it often leads to washouts.

Carl - Thanks for sharing with us your views of the market. Reading your blog has been of a high educational interest to me.

Regarding the magazine covers, I have a theory: It seems to me that the business media finally understands how well end-of-the-world stories sell these days. Regardless of the intended/unintended damage they could cause, the printed media is under a lot of pressure these days to sell newspapers, magazines, etc...Please remember that they have been taking a hit for a long time with the advent of the Internet and the reluctance of the consumer to increase comsuption of printed media. At every chance they have, and now sooner rather than later, they will continue jumping on the bad news boat, simply because bad news sell...
There is also anecdotical evidence that more people pay attention to the business media via TV (CNBC, etc), printed news, or even increasing traffic on well recognized financial blogs, when the market is correcting.
The above will continue challenge the "magazine cover as contrarian indicator" in the foreseable future. Times are different now.

Anonymous above has a point. Ever since W R Hearst, and probably before, bad news sells as well as scandals and the police blotter. But one expects business and economics publications to rise above the evening news and the daily blather.

On internet market chats the news is usually bleak and now totally black. Lots of sentiment measures are now similar to those at the August lows.

One thing I (and many others) have noted is that the USD/JPY cross is tracking or leading the SP futures nearly tick for tick. I can think of a lot of reasons why that would be so, but it's spooky.

Waiting for the year end rally here and expect it to start soon!

USD and the YEN is like trading used toilet paper for a slightly browner one. This is just the banks pulling in the risks and reducing the "carry" trade. Once this is washed out, the markets will definitely rally.

The Dow has confirmed the transports by violating the August 16th lows, which has triggered a DOW THEORY SELL SIGNAL...I expect mayhem going forward until this market gets cheap enough for the institutional investors to buy in again. The 3 peaks and a domed house pattern peaked on OCT 9th...this is the descent back down to point 1 or 2 of that technical pattern.

Just wanted to put up a note here saying your blog is appreciated. I tend to follow a more trend based system so I' sitting on cash right now but I enjoy reading your blog because you seem to be very disciplined and making decisions in a very careful and well thought out manner.

Kudos to your diligence and disciplined approach to predictions and certainly your willingness of sharing the information to the public.

Just curious what the time base adjustment should be under different economic background conditions?

Shouldn't we view the bull market in the couple of years as expedited peaks in all long- and mid-term cycles, and now we have a somewhat delayed ones? Any theoretical or practical suggestions of reading would be appreciated.

Well, Carl, let my comment count as one of your supportive ones, as well as my blog entry: