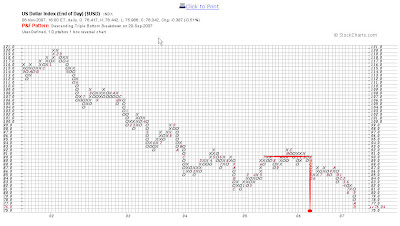 Here is a point and figure chart of the US Dollar Index. I last commented on the dollar here.

As you know I have been bullish on the dollar and wrong (so far). But the bearish consensus on the dollar is so overwhelming that I am determined to stick with my view even if I go down with the ship.

I do think that the dollar has pretty much exhausted its potential for the down leg which began from the 92 top which was established in December 2005. The market has dropped almost 2 years and about 18% from there. Moreover, the point and figure count across the top formation which I have illustrated here projects a low at 75.00, a level which was nearly hit today. I think we shall soon see the start of a multi-month rally which will carry the index at least up to the 85 level.
Posted by Carl Futia at 12:08 PM

Lets see what happens into December

Finally got the long exodus you were looking for in the S&P. You would have been filled at your original 1488 buy price, bounced from there so far. Maybe we panic sell into the close and fill the 1477 level, but that would require yet another fairly extreme day and we just had one last Thursday.

BTW, I am noticing the bulls are getting harder and harder to come by lately.

Karl - I hope the good ship "Dollar Pop" doesn't take you down because you won't be the only one that goes down.

Thank you for addressing the dollar...I still have my 1923 100 million Mark note just in case it suddenly proves more valuable than green paper in my pocket.

Additionally, perhaps when you have time you can comment on how contrary opinion is correctly established. Someone's opinion may be quite different from how they actually have their money invested.

Amazing how many people believe the Fed is printing money. Blogging and availability of opinions commonly held have led to the biggest lie of this cycle. That is complete and utter nonsense. But, let them believe as they will.

The dollar is surely tied to quantitative trading used by hedge funds and there is massive speculation against the dollar right now. Just as there is massive speculation in gold and oil. Given those two trades are probably tied to each other in hedge fund strategies, when one blows up, I would expect the other as well. This is the most noncorrelated asset in an asset bubble and it will find a bottom somewhere for fundamental reasons. Given the massive push in oil and gold looks exactly like the massive push down in dollars recently, I would expect the dollar bears to be eating gruel soon enough for reasons too lengthy to post on here.

I've enjoyed your work since your "periodic number cycle" and "square of nine" days. Your market comments are always interesting.

I hope your analysis is correct about the dollar finding support in its immediate vicinity. However, less favorable downside objectives can be derived from counts stretching from Mar04-Apr06 and Jan04-Oct06, which are 58 and 45, respectively. Until the short interest rate spikes, there will be little indication that the Fed will be signalling any intent of stemming the greenback's slide.

I am further hoping that the large formation beginning in Jan04 is the start of a huge accumulation area, with the present decline representing a final shake-out of the longs before a significant rally. Should this formation represent the converse -- distribution -- then it would portend the most serious national and geopolitical consequences for Americans, as well as the rest of the world.

Since the end of the world tends to be a personal phenomenon rather than a group event, I think that your forecast leads to the more likely course of events.