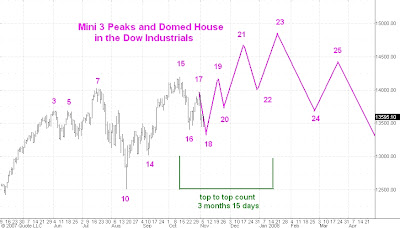 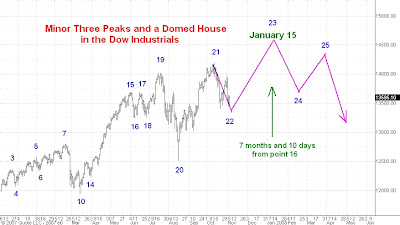 This is an update on the status of two examples of George Lindsay's Three Peaks and a Domed House formation. I last commented on this subject here. All of my George Lindsay posts can be found here.

The first chart you see above this post shows my interpretation of a minor formation. The numbers correspond to the Lindsay's numbering of the ideal formation which you can see here.
I think that the drop from the October 11 top is the decline to point 22, with the peak of the domed house, point 23, still ahead of us. I now am estimating January 15 as the date for point 23. This is 7 months and 10 days from point 16.

The second chart shows a mini-formation. Here I think we are in the middle of the "five reversals" part of the domed house, points 15-20. Once point 20 is reached we should begin a rally to point 23 which again I see as developing in mid-January. This coincides with one of Lindsay's top-to-top counts which he asserted nearly always will be found timing the bull market top.
Posted by Carl Futia at 8:43 AM

Thanks Carl, you da' man.

Your interpretation of Three Peaks and a Domed House gives a high degree of confirmation of the 4th quarter seasonality.

Do you anticipate similar results with the S&P 500 index?

Thank you for your excellent work Carl.

Carl, thank you for taking the time give us an updated Three Peaks and a Domed House forecast.

I take back what I said about you in a previous post. Perhaps you are correct...I actually believed that point 23 came and went, but now I am more inclined to agree that we are approaching 18(if not there already) and moving through the series. Fingers crossed.

HI CARL
i tend to agree with both your counts yet i think todays lows are now going to hold . the late day rally completed 5 waves up on a 5 minute and 10 minute chart .
also the daily wave is a wave 2
and the weekly wave count can be a 2 or a 4th wave which should be finished . where we differ though is the final end of this bul mkt and where the real bear mkt begins
in terms of the mkt melt down .
next year will be an interesting year thats for sure .

Carl, thanks for the excellent works and the update on the 3PDH.

What is the current projection of point 26, 27 and 28. Price level and time frame wise. Beyond point 28, what's next?

Thanks once again. Best Rdgs/BC

Carl,
Just a note to thank you and express my appreciation for taking the time and effort to update your analysis using George Lindsay's Three Peaks and a Domed House methods.
Although I don't recall any of your recent comments on the quality of the most recent rally in the broad market, the breadth coupled with lower volume up-days and higher volume down-days seems to be a significant negative divergence which may show up in further index price deterioration at any time.
I am looking forward to the forthcoming rally's to continue to reduce individual stock long positions and increase intermediate index short postions as we move toward 2008.

Thanks Carl for this update. Am still looking at this pattern from a very long, ten year, perspective, which I now see as tending to fit in with your pattern, i.e. dome in sight, but as always shall have to wait and see.

Do you still believe that we are close to point 22 on the three peaks mini chart even if the dow is closing in on point 20? Could the pattern have broken in your opinion?

Isn't it possible (likely) that the peaks in July and October are the first two peaks in the three peaks formation and that we are now building the third peak which could top out in mid Jan.2008? This time span is consistent with Lindsey's 6 to 10 months for the three peaks and would be a more conventional Three Peaks and Domed House formation

The idea that July and October of 2007 are the first two peaks of a major three peaks formation is one that I have been working on. I expect to comment on it in the near future.

This Dome concept can be tricky for the short term and also for the broad market, but you may remember that I mentioned that it should be looked at for a longer stretch, than that originally intended by its author, i.e. in my rash book ten years, and if you look at C then you can just anticipate what might happen to the broad market inoften 2008, or there again - maybe not; anticipation being the biggest problem of all.

Anyway, thanks again for your blog and Merry Christmas and best wishes for the New Year.

Dome has been drawn.

Carl, George Lindsay's chart came good and played out, albeit it on the ten scale and not the short term model he wrote about. You might wish to review this.